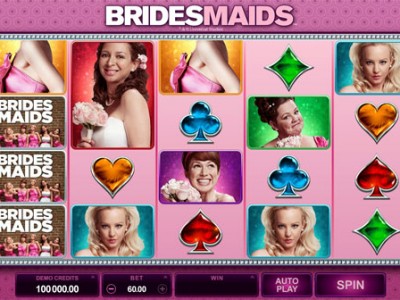 Hilarity will ensue whenever bridesmaids get together, and this is perhaps never more clear than in the slot game version of the film, Bridesmaids. All the characters from the film are included, as either a standard symbol or a stacked symbol. Making up the rest of the icons are standard card suits.

Wagers can be placed on the game from the minimum of £0.40 up to the maximum of £60 per spin. This takes effect over 40 non-customisable paylines, and on a five reel, four row layout. It’s quite hard to understand whether the background soundtrack is supposed to make you feel as though you’re at a wedding reception or in a casino, as there’s a definite noise of games machines and crowds of people. Alas, such trivialities are not really of importance considering the amount of extras included in the game.

Scatter symbols come in the form of cupcakes, and spinning three, four or five of these on the reels will trigger the bonus wheel of fortune round. This round features ‘Friendship Freespins’, ‘Flying High Freespins’, ‘Boutique Bonus’ and ‘Magic Moments Bonus’ as rewards.

Both freespin wins from the wheel reward you with 10 freespins, although the ‘Friendship Freespins’ feature stacked character symbols as well as wilds. Furthermore, wins are paid both ways. ‘Flying High Freespins’ feature rolling reels, which award multiple consecutive wins, and growing wilds, which stack and increase by one wild per spin.

The ‘Boutique Bonus’ requires you to match the bridesmaids to win cash prizes and bonus multipliers, while matching the bride will complete the bonus. And finally, the ‘Magic Moments Bonus’ sees you selecting one of five photographs to win a cash prize. You can pick up to 10 of these, and finding a carrot will end the bonus round.