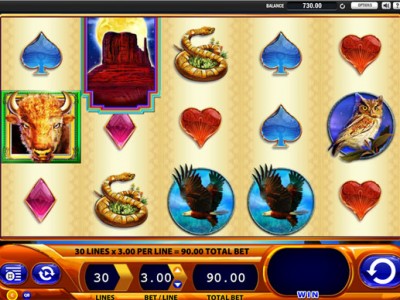 Do you have the spirit of the buffalo inside you? Or perhaps you’re more of a hawk? No? A lizard, maybe? Well, all in all, it doesn’t matter which one, because as long as you’re able to line up three or more symbols of the same animal in Buffalo Spirit, you’ll be sure to be a winner. As expected, the game has numerous different animal-themed icons, including hawks, owls, lizards, snakes and foxes, alongside a couple of piece of plant life.

The game provides a five reel, three row layout, and a total of 30 non-customisable paylines. Players can place a minimum wager of £0.01 per line, or £0.30 per spin in the game, and a maximum of £3.00 per line, or £90 per round. There isn’t a theme-based soundtrack accompanying the game, and the remainder of the symbols on the reels are made up by playing card suits.

It stands to reason that the symbol of the buffalo is the wild symbol in this game. The game features two buffalo symbols, with the icon surrounded by a green border appearing in the main game across all reels except the central one, and the other, surrounded by a red border, appearing on reel three. Should the central icon be part of a winning combination, this triggers the replicating wild feature.

The feature symbol, represented by a huge, moonlit rock, acts as a scatter icon. Three or more of these appearing across the reels reward freespins, with three providing 10 freespins, four providing 20 freespins and five providing 50 freespins.