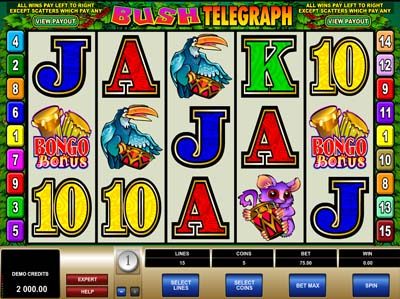 Don’t worry, Bush Telegraph from Microgaming doesn’t have anything to do with the former President of the United States. It’s actually based upon the words that are closely associated with describing how undeveloped species communicate with one another. That being the case, you’re taken deep into the heart of the “bush” as you’ll be dropped right in the middle of animal country. As far as design goes, it’s one of Microgaming’s more primitive games, shall we say, but it still offers up an entertaining enough option to play. The reels are filled with the regular A, J, K, Q and 10 icons, in the first instance, and they’re joined by three different animals all playing drums – a large bird, a warthog and the tarsier.

It’s all designed upon a five reel and three row interface, so you’ll find that everything should look quite familiar to you. The developer has added a total of 15 different bet lines into the game, but these can be customised at any time by using the ‘Select Lines’ button. Further adjustments can be made in terms of the bet that you place per spin, beginning with the possibility to change the value of a single coin between £0.01 and £2. Then, you can alter the amount of these coins in play per line between one and five, which provides the maximum overall wager possibility of £150 per spin.

The game has also had a couple of special features integrated into it in order to make gameplay a little bit more entertaining, and these specials begin with its wild symbol. This stands in for all other icons on the reels in order to form a winning combination, with the exception of scatter and bongo bonus icons. Should five of these wilds appear on a winning pay line, you’ll receive a maximum pay out of 7,500 coins.

And, speaking of the scatter icon, this is represented by the seed pod, and these provide a pay out wherever they show up on the reels. Should you manage to spin three, four or five into view in any location, you’ll be rewarded with 10 freespins, where all wins formed will be tripled.

Finally, there’s the bongo bonus, which is trigger by three or more icons of bongo drums appearing on an active pay line. This will take you to another screen where there are 11 bongo drums waiting for be drummed. You will need to select the ones which you believe to hold bonus coins.

Although the games designed and offered in more recent months from this developer are a lot more graphically appealing, there’s something about some of the older options available from Microgaming that really makes you want to play them. Bush Telegraph is one such game.