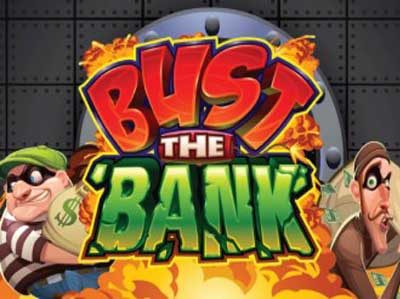 Bust the Bank is an online slot game by software provider Microgaming. Ever thought about robbing a bank? We have all played with the idea at least once in our lives. Well, Bust the Bank may just allow you to live that experience in a really fun, even comical way. This title pursues the age-old cops and robbers theme, featuring both parties on the reels of this game. The graphics here are great, and have that fun old-school cartoonish feel to them, which just adds that extra level of playfulness to the overall vibe. And the soundtrack is very fitting, too. It has kind of a Pink Panther feel to it, which we think is very appropriate and necessary for that needed bit of humor. As for the backdrop, you will find yourself looking at sheets of metal bolted together, implying it’s a great big vault or safe. 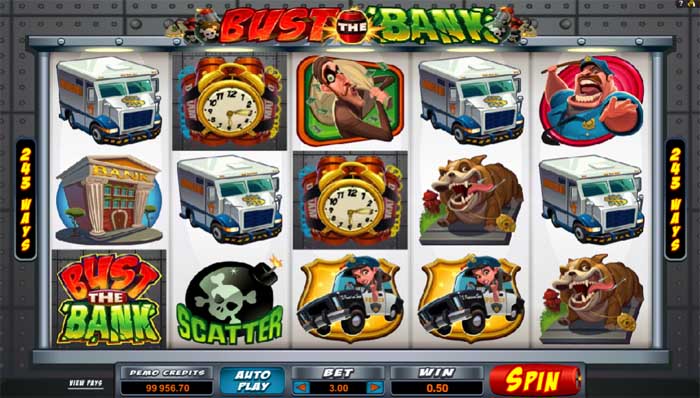 Heading over to the symbols in Bust the Bank, that’s where the real fun starts. First in line is the rather massive and perhaps overweight police dog running with its tongue trailing behind it. Next is the bomb with a timer that’s set to go off any second now. Then we have the armored car and the bank itself. This takes us over to the chase with the higher value character symbols. They include the two cops and the two robbers stealing the bags of cash. The chubby one carrying the gold coins is the most lucrative, offering payouts of up to 500 times your total stake. As for the layout in this online slot game, things are fairly traditional. There are 5 reels and 3 rows, with a total of 243 ways to win. The paylines are obviously fixed, so you can’t regulate them or change the amount available. With that in mind, though, the stakes here have a more than flexible range. You can bet anything from the minimum of 30p per spin and up to the maximum of £300 per single spin. The slot RTP is also quite high at about 96.75%, giving you better odds in the long run.

The Bust the Bank logo symbol represents the game’s Wild and can appear in any position on the reels. It doesn’t offer any payouts of its own, however. But as any Wild should, it will be able to replace the other symbols to help you create better winning sequences. There are three exceptions to this rule and those are for the Scatter, Bonus and Piggy Bank symbols. As you might guess, each of these also comes with their very own special feature.

First in line is the Scatter symbol, picturing a classic black bomb with a fuse and a skull on it. It’s just as lucrative as the highest paying regular symbol and can also land in any position on the screen. More importantly, though, it will be able to trigger the game’s freespins bonus feature. If you land three or more Scatter icons simultaneously during the same spin, you can count on receiving a total of 8 freespins. In addition, for every Scatter symbol that you land during the bonus round, you will also receive an additional freespin. And to top that off, all throughout the duration of the freepins, reels 1 and 5 will become fully Wild! Keep in mind, however, that the freespins round cannot be retriggered.

Moving on to the other two special symbols in this slot game, we have the Bonus icon in the shape of a safe. You will be looking to land it in any position on reel 1 or 5, in order to trigger the Safe Bonus feature. As a result, the safe will open and will reveal a random coin value. And if there are other symbols below the Bonus icon, you will also receive a cash prize for those.

Last but not least, we have the Piggy Bank bonus feature. And you can trigger it by landing the pink Piggy Bank symbol anywhere on the middle (third) reel. Just click on the piggy bank and it will reveal your cash prize. In addition, this game also features a random bonus feature, brought to you by the two robbers Bob and Larry. These two can come onto the reels at any point during gameplay, as they run trying to escape the police. And in doing so, the robbers will award you a random bonus prize. 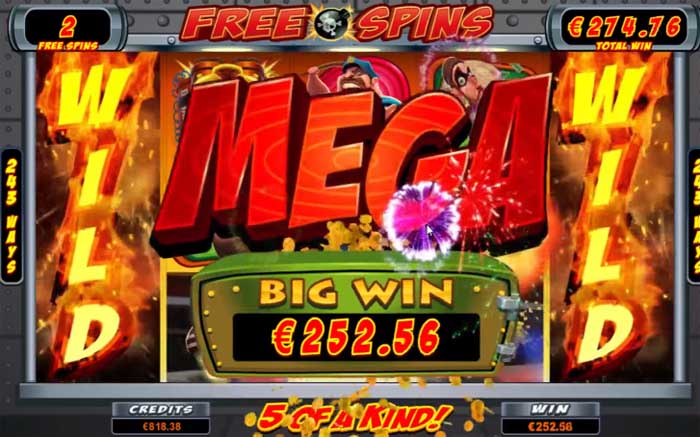 As you can tell, there’s simply a plethora of features in Bust the Bank ready to please even the pickiest of players. So, if you like there to be plenty of action in a slot game – you should certainly try this one out. We would put this title in the medium to high variance range with higher wins certainly being available in the freespins bonus round. But you can also score some pretty decent rewards from the other features, as well.