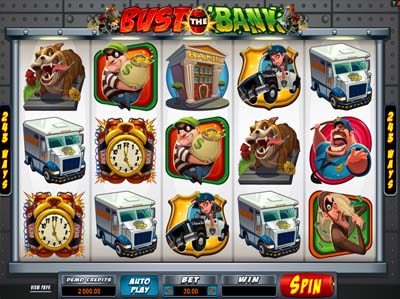 Bust the Bank gives you a pretty good idea of what this game is all about from its very title. You’ll basically be taking on the role of a robber and you’ll be looking to steal away all the money and loot before the cops come and nab you. This offering from Microgaming features very high quality reels and imagery, beginning with the icons incorporated into it. These exist in the form of a police dog, a stack of TNT with an alarm clock rigged to it, a getaway vehicle and a shot of the bank itself, in the first instance. These are joined by four higher paying standard icons – a female cop in a police car, a male cop ready to swing his truncheon and two separate icons of your robber pals.

The game is played on a regular five reel and three row interface, meaning that you’ll be presented with a pretty standard design on the whole. The developer has also included a total of 243 ways to win, and this is not something you’re able to change. However, all players do have the ability to switch their wager placed around, and this is done by utilising the arrows at either side of the ‘Bet’ box. There, you’re able to choose from wagers between £0,30 and £300 per spin.

If the 243 ways to win aren’t enough to entice you, perhaps the specialities included in the game will be. There’s an icon of a green safe added to the reels, and when this appears in any position on reels one or five, it will open to reveal and award a coin value.

Further to this, there’s a ‘Piggy Bank Bonus’, and if a piggy bank icon shows up in any position on reel three, you’ll be rewarded with a bonus amount by clicking on it to smash it open! Larry and Bob, the two robbers, will also reward you with bonus prizes at random times.

A scatter symbol in the shape of a bomb is included in the game too, and if three, four of five of these appear in any location, you’ll receive a total of eight freespins. During this round, reels one and five are completely wild.

Finally, the game’s own logo is its wild icon, and this will substitute for any other symbol on the reels, except the scatter and two bonus icons, in order to form a win.

Bust the Bank is a great visual offering, backed up solidly by the included special features that have been nicely incorporated.