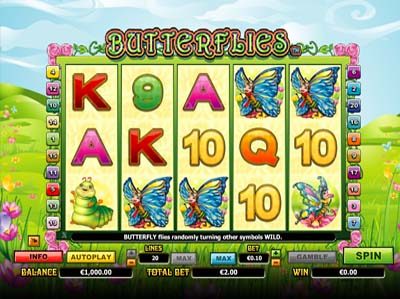 For those of you who enjoy all creatures great and small, NextGen Gaming’s ‘Butterflies’ game offers up a selection of the smaller variety on its reels. The scene takes place against a backdrop of rolling hills and fields, with various flowers dotted around to bring colour to the place. The reels are then filled with caterpillars, two different butterflies and a toadstool. In addition, you’ll also find the standard icons of A, J, K, Q, 10 and 9 have been added. Unfortunately, it also includes a fairly generic piece of music to accompany your game play, but this is something that one or two other developers frequently get wrong, so it’s only a minor downfall.

The interface includes five different reels and three rows, and then are accompanied by 20 different pay lines. These can be customised to suit your own personal preferences, so if you have a tendency to wager on fewer, you can do. Furthermore, there’s also the option of changing your bet level around, which ranges from its minimum of £0.01 and increases up to the maximum of £2 per active line. Therefore, a maximum overall wager of £40 per spin is able to be placed with all 20 lines active.

There is a wild icon included in game play as well, and this is represented by the green cocoon, or, as the game refers to it, ‘House’. This will appear only on reel one, and it substitutes for all other symbols, except for the scatter. This icon is also the key to the special feature as well.

Whenever the ‘House’ symbol does make an appearance, it hatches and a butterfly escapes from it. This will then fly to random other symbols, and some of them may turn into another cocoon icon, acting as the standard wild does. This is known as the ‘Wild Butterfly Feature’.

Further to this, the game’s scatter icon is represented by the red flower, and this pays out wherever it appears on the reels, with five showing up rewarding you with a maximum pay out of £100.

Butterflies is not specifically one of the greatest games available to play, and NextGen Gaming has a plentiful collection of other products that appeal more so. However, it isn’t by any means one of the worst games we’ve played, and is able to provide a decent level of entertainment.