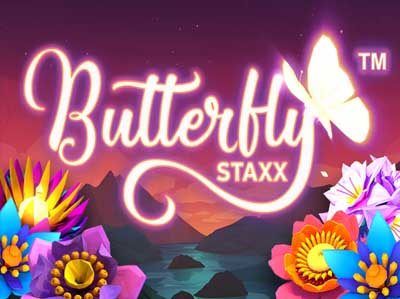 Butterlfy Staxx is an online slot machine created by slot game manufacturer Netent. And it’s just what you might expect from this particular provider. It has a unique theme, creating this completely otherworldly atmosphere. And helping it achieve that are of course the lovely, high quality visuals, as well as a really compelling soundtrack accompanying gameplay. As a matter of fact, the melody here is so pleasant and relaxing you’re not going to want to put it on mute. This particular title takes players to a fairytale kind of land of strange flowers and glowing butterflies. The backdrop depicts a mountainous landscape, with a river running somewhere in the distance. And on the outside of the reels you can see a barren tree that is just preparing to blossom with buds of purple flowers. In addition, we also found the neat animated sequences throughout gameplay very entertaining. 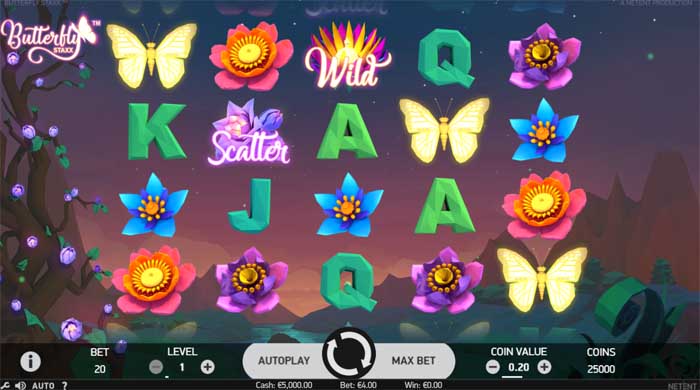 As far as the symbols go here, they start off with the more common lower value playing card icons. Instead of each coming in a different color as is usually the case, the developers have made them in different shades of green, ranging from darker to lighter as their value increases. The symbols are A, K, Q and J. Following these, you will see the higher paying symbols that are the blue, purple and pink flowers. And last but not least is the glowing golden butterfly, which is the most lucrative icon on these reels. You will notice that the layout in Butterfly Staxx is slightly unusual, when comparing to the majority of slots out there. It features 5 reels and 4 rows, with a total number of 40 fixed paylines. This means you can’t regulate their number. The betting amounts here, however, are per every 2 lines, so they don’t start off too steep. As a matter of fact, you can bet any amount from 20p per spin up to the maximum of a whopping £400 per single spin. In addition, the game boasts a very agreeable RTP of around 96.8%.

There is a Wild symbol in this online slot game and it comes in the form of yet another magical flower. Only the word ‘Wild’ will give it away immediately. You can expect to land the Wild symbol in any position on any of the five reels during gameplay. What’s more important, though, is that it will be able to replace any of the other symbols on these reels. And that way it can potentially help you gain better winning combinations. However, the Wild doesn’t offer any payouts of its own. And there is one symbol for which it will not be able to substitute and that is the game’s Scatter.

In turn, the Scatter symbol also depicts a beautiful blossom, but you will also have the description on it to help you identify it on the reels. It, too, will have the capacity of appearing anywhere on the screen. And just like its Wild counterpart, don’t expect it to offer you any payouts. Instead, the Scatter here will be able to trigger the game’s special feature – the Butterfly Spins. This is in essence a freespins feature, and triggering it will require you to land a minimum of 3 Scatter symbols during the same spin.

3 Scatters will award you a total of 5 Butterfly freespins, whereas 4 Scatters will give you 6 freespins. And last but not least, 5 Scatter icons will reward you with the maximum of 7 freespins. As a result, you will find yourself looking at a new set of reels with slightly different rules. Instead of regular symbols, you can only land Dominant or Active Cocoons. The latter will turn into Butterfly symbols, after which they will fly as far left on the reels as possible. And they also remain there for the duration of the freespins round.

Last but not least, we shouldn’t forget the respin feature that this game also boasts. You can trigger it by landing a full stack of Butterfly symbols that cover an entire reel. Similarly to the freespins, those symbols will then move over to the left side of the screen. And after that they will trigger a respin, whilst remaining on the reels themselves. If any other Butterfly icons happen to appear on the screen, they will repeat the sequence, triggering a further respin. This can go on until no more of these symbols land on the reels.

Butterfly Staxx is certainly a very fun game with a very interesting setting. There are great visuals to enjoy, with a matching soundtrack and oddly pleasant overall vibe, too. It’s also a very relaxed slot game. And that’s not just because of the theme, but also due to the game’s rather low variance. Wins come in pretty frequently, but they’re certainly not massive prizes. And you also get to trigger the special features fairly often, which doesn’t hurt either.