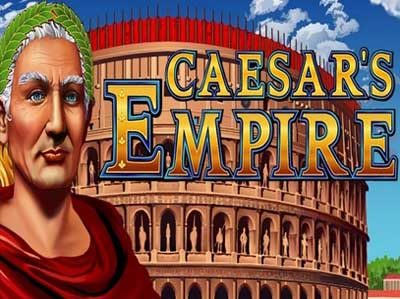 Caesar’s Empire is an online slot game by software developer RTG. It centers on the Roman Empire and Julius Caesar as its theme, and you will be able to clearly see this as soon as the game loads. First of all, the backdrop has the iconic Coliseum in the center of Rome, towering over the reels. It’s a bright sunny day, with a clear blue sky and there’s an overall kind of triumphant vibe going on. That much is also conveyed by the occasional sound effects that are audible during winning combinations and when there’s a chance you may trigger the bonus round. Besides that, however, there are no extras in the game’s appearance. The visuals are actually a bit dated and lack the contemporary flashiness that most modern slots strive for. That’s not to say there’s anything wrong with them, though. 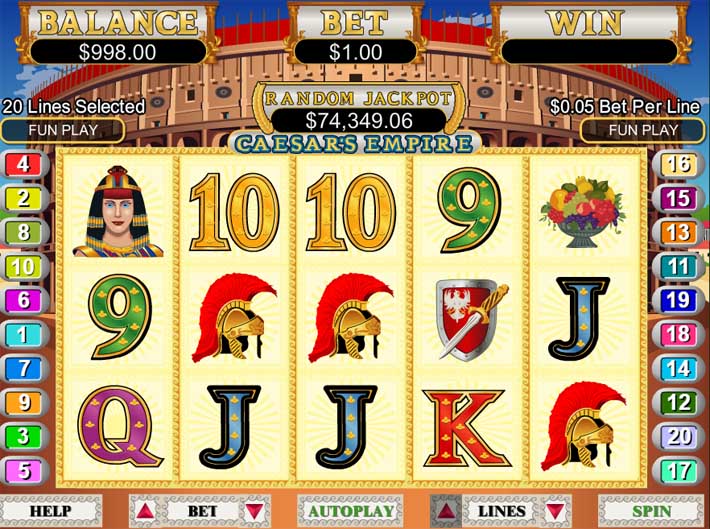 The symbols in this title start off with your regular lower value playing card icons. We can’t really say there’s anything impressive about their design or that there’s some particular affiliation to the theme. And the symbols are A, K, Q, J, 10 and 9. Next in line are the higher value symbols and they start off with a bowl with a pile of fruit. Next is a red coat of arms, following which is a Roman golden helmet. Then finally the highest paying of the regular symbols is Cleopatra. She can offer you prizes of up to 2,500 coins when on an active payline. Speaking of which, there are 20 paylines available in total in this online slot game. However, you are free to also adjust them to your liking and play with as few as just one payline. The respective controls are just below the reels. And right beside them are the controls that will help you set your betting amount. Stakes here can span from a minimum of 20c per spin up to a total of $100 per single spin. As for the layout, it’s quite conventional, featuring your common grid of 5 reels and 3 rows.

Keep an eye out for the golden coin symbol on these reels, because it acts as the game’s Wild. In addition to that, it’s also one of the two most lucrative icons in this game, alongside Cleopatra. But unlike like the regular symbols, you can’t expect to see the Wild on just any of the 5 reels, at any point during gameplay. It can only land on reels 1, 2, 3 and 4. What’s more important, though, is that it will be able to replace any of the other symbols present. And in doing so, it can help improve your winning potential. The Wild can help complete winning sequences, but on top of that it will also triple the payouts for those winning sequences. However, the Wild symbol will not have the ability to substitute for the game’s Scatter.

The Scatter pictures the Coliseum in its full glory and splendor. And, though it doesn’t offer particularly impressive payouts, the Scatter will at least be able to land in any position on the reels. Better yet, it will also be responsible for Caesar’s Empire’s one special feature – the freespins bonus round. In order to trigger the bonus, you will be looking to land at least 1 Wild symbol in any position together with the Scatter on reel 5 simultaneously during a spin. It’s not quite the conventional way of doing it, but that’s all the more exciting.

As a result, you will receive a total of 10 freespins. And during this bonus round, the golden coin Wild symbol will also be able to appear on the fifth reel. Furthermore, all throughout the duration of the feature, any Scatters will transform into Cleopatra symbols or Wilds. And you will really want to keep an eye out for the Wilds, as every one of them that lands on the reels will award you a random number of up to 5 extra freespins! And as is that weren’t enough, this feature also boasts a 2x multiplier on all freespins winnings. In addition, note also the Progressive Jackpot above the reels. You can keep an eye on it as you play, and perhaps at some point you may get lucky and win it. Keep in mind that winning the jackpot happens fully at random and can take place after any given spin.

If you’re looking for a decent, simple slot game, you will certainly like Caesar’s Empire. It’s pretty basic in all aspects, including even its theme and visuals. But more importantly, it also provides a very straightforward approach to gameplay with only one special feature. The 2x multiplier in the freespins is surely a good touch, along with the possibility of gaining more freespins, and with the extra high value symbols, it can certainly yield some attractive rewards. But this is overall a fairly low variance offering.