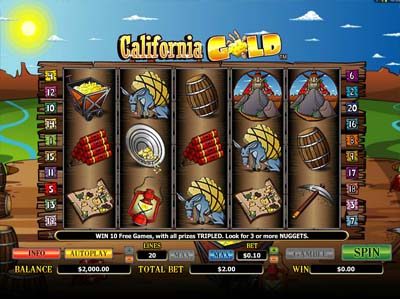 This product from NextGen Gaming tells the tale of a gold miner in search of treasures untold. Or at least, that’s the impression we get. In a game which could be considered some kind of ‘Yosemite Sam’ Warner Bros. rip off, you’ll find reels filled with icons of the gold miner himself, a tired looking mule with a huge find on his back, a mine cart filled with nuggets, a stack of dynamite, a treasure map, a lantern, a pick axe and a wooden barrel. Each of these icons is designed in a cartoon stylised way, presenting players with a thoroughly fun product.

Alongside its imagery, California Gold contains five reels and three rows, as well as a total of 20 different pay lines. These can be customised to suit your own personal preferences, as can the amount you’re able to bet per round. This is able to be changed with the plus and minus buttons at the right of the amount currently shown, with a range between £0.01 and £2 per active line. This allows players to place a maximum overall wager of £40 per round. An ‘Autoplay’ button has also been added to allow players to set the reels off spinning for a maximum of 500 rounds at the same wager level.

There is a wild icon included in the game, which is represented by the toothless miner with a chunk of gold in his hand. This icon will appear on reels two, three and four only, and it will substitute for all other icons in order to make a winning combination, except for the scatter. Should this symbol appear on reels two, three and four in any location at the same time, it will activate the ‘Mad Miner’ bonus round. This requires you to select a mine and collect nuggets to win big amounts. This round is also able to be triggered during freespins.

And speaking of the scatter icon, this is represented by the nugget of gold. This pays out wherever it appears on the reels, with five of them offering up a maximum pay out of £100, depending upon your initial wager placed. When any three of these appear in any location on the reels, you’ll be rewarded with 10 freespins. All prizes are tripled during this round as well.

The developer has also added a gamble feature into this game, allowing players the opportunity to increase their winnings via a side game.

California Gold has some intriguing special features included in it, which enhance it beyond its fun graphical content.