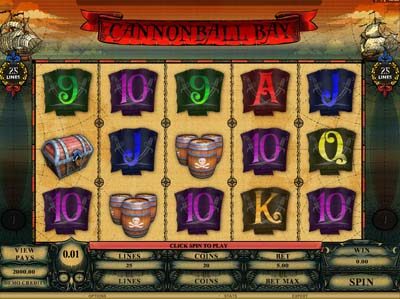 Cannonball Bay presents gamers with a pirate-themed offering, and even though this particular theme has been done quite over and over again, Microgaming have managed to create a mildly innovative offering to appear alongside all the others. As such, this one will present you with a variety of different standard slot symbols. These are joined by the more thematic offerings of a ship’s anchor, a steering wheel, three kegs of explosives and, finally, a treasure chest.

As for the actual game itself, this is presented on a five reels and three rows, so everything in terms of its interface is very much familiar. Microgaming have also included 25 different pay lines as well, but these can be altered with the use of the plus and minus buttons in the ‘Lines’ box. You also have the ability to change around the wager that you place, and this is done first of all by adjusting the value of a single coin. This provides a range of between £0.01 and £50 per spin, depending upon the amount of lines you have active.

There are a couple of specialities added to this game in order to make it more entertaining, with the first of these being the cannon icon. This is the game’s wild symbol, and as such, it will replace all other icons, except the scatters, in order to form a winning combination.

The scatters are represented by the image of the Spanish conquistador, and as a scatter, he provides a pay out wherever he shows up. Furthermore, if you are able to spin three or more of these on to the reels in any location, you’ll be given five freespins. During the freespins round, cannonballs will be fired on to the reels and upon exploding, they’ll turn other random symbols into wilds. And, if you spin three or more scatters onto the reels during the round, you’ll receive a further five freespins.

Cannonball Bay is a really nice offering from this developer, providing high quality graphics, intriguing gameplay on the whole and standard special features.