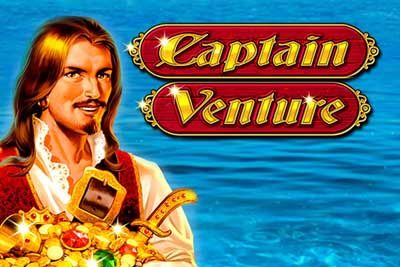 Get ready to set sail with Captain Venture and collect the bounty of the high seas. With the obligatory nautical pun out of the way, let’s get to know this slot by Novomatic. Captain Venture actually came to being as a land based slot, but due to its popularity, Novomatic decided to give it an online version, which you’ll be sure to recognise by the overall pirate-y theme, and the image of the strapping young captain himself, holding an armful of booty. 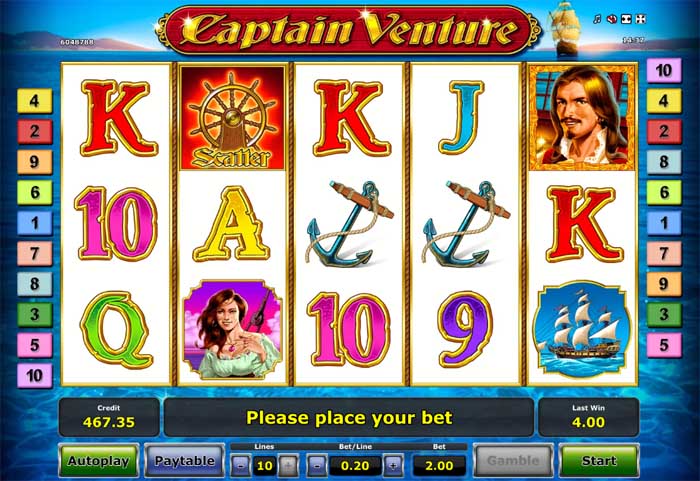 In a nutshell, this is a 5-reel slot with 10 paylines total. It can be played across multiple platforms, such as PCs, mobile phones and tablets, so you can take it on the hoof (though this is not quite recommended).

The minimum bet is one coin per line, which, translated into real money, can be anything between 10p to £50 a spin. Naturally, how much it’ll be depends on how you set it before spinning, and you can change it any time you like during your session, just not mid-spin. It has a fairly low RTP (94.01%), but it more than makes up for it with the freespins feature.

Before we move to how you can actually take the jackpot, let’s just get the lie of the land. The basic symbols are the same ones you see on playing cards, going from nine to ace. Then there’s, in no particular order, a map, an anchor, a helm (that’s the ship’s steering wheel for all you landlubbers), a boatswain with a spy glass, a lady (seems that seamen are not such a superstitious lot like the stories would have us believe), and finally, a long-haired pirate, the Captain himself. 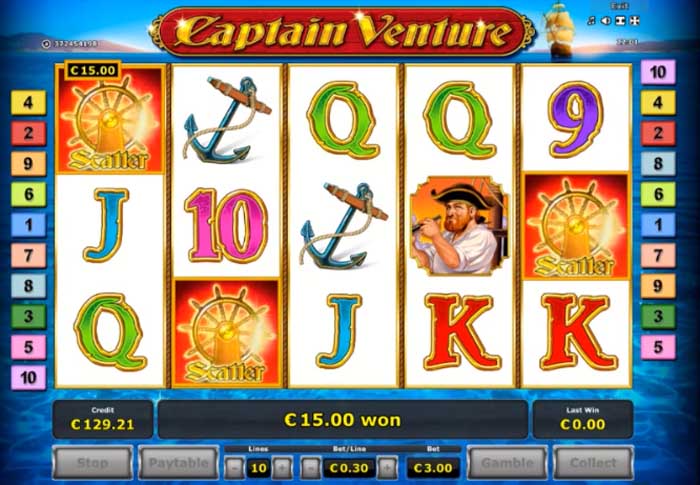 The two most important symbols are the wild and the scatter, or Captain Venture and the Helm, respectively. As far as the former is concerned, it acts like most other wild you’ve had the chance to see. It replaces all other symbols except the scatter. Furthermore it also acts as a multiplier, multiplying your winnings 2x when present, and it can also have winning combos of its own. Namely, if you get five of these, as mentioned above, you can win a potential payout of 8.000 times your stake. 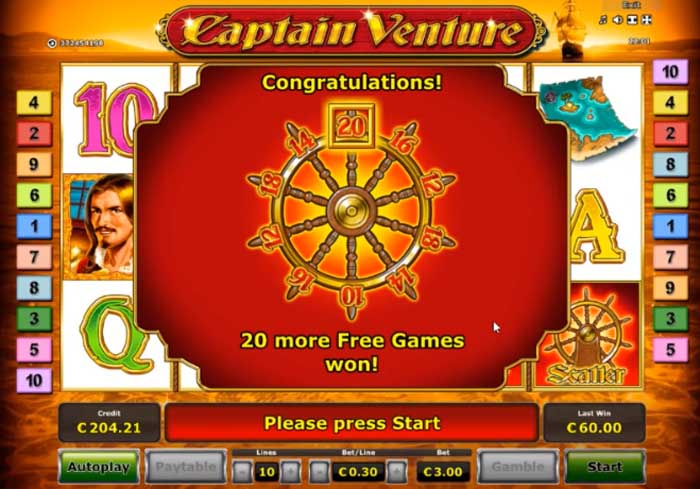 Once you get three Helms (scatter symbols) anywhere on the reels, you can access the sort of Wheel-of-fortune special feature, whereby you’re awarded 10, 12, 14, 16, 18 or 20 freespins. This happens once in a blue moon, but once you get there, it can go on almost indefinitely. It’s possible to trigger another freespin event several times while in the bonus round, and if you are lucky the feature can “go on for ever”.

Better yet, all the winnings from these are subject to a 4x multiplier, which becomes a 8x multiplier if the saucy Captain is present. Now, here’s a hypothetical situation – let’s say you’re playing freespins. That’s any winning, times four, right there. Now, factor in the wild symbol, and you get 8x. There’s more – imagine five of these appearing on the line you bet. Now do the maths.

Captain Venture is a super volatile slot game with quite a low RTP of just 94.01%. Normally we would not recommend a slot with such a low RTP. But the freespin scenario we just mentioned above still makes this game very attractive despite a relative boring base game. There’s no reason for you to be left out, especially when there’s a chance to get where he is by doing nothing more extravagant than clicking your mouse.