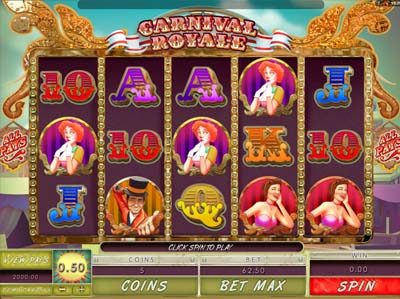 For a real carnival thrill, you should definitely make yourself familiar with Microgaming’s Carnival Royale slot game. And regardless of what kind of show or features you like to see at such an event, there’s little doubt that Microgaming have thought of it and included it in this game. Presented on visibly colourful reels, there are several different icons included within, starting with the often seen A, J, K, Q, 9 and 10 symbols. These are joined by six different thematic icons, beginning with the lady dressed up as a clown. She is joined by the icon of the strong man, another of a lady dressed up as a stage performer and the lion tamer.

Additionally, there are five reels and three rows available in this game, so it provides a standard enough interface. The developer has also added a total of 243 fixed ways of winning into the game, so you cannot change this particular feature. However, you do have the chance to adjust the wager that you place, and this is done first of all by altering the value of a single coin. This is changeable between a minimum of £0.01 and increases up to £0.50, while the amount of coins you’re able to play per line can be altered between one and five.

A game that has been designed and based upon the theme of a carnival ought to have some intriguing special features in it, and this one certainly does. First of all, there’s a wild icon, represented by the circus monkey. As a wild, this will substitute for all other icons on the reels, except for scatter symbols, in order to form a win. Wilds can only appear on reels two, three and four.

Scatters appear in two different forms, the first of them being the ‘Balloon Burst’ icon. This triggers the feature round of the same name when three or more appear anywhere on reels three, four and five. You basically need to select balloons to pop, which will reveal coin values or a ‘Collect’ addition.

We love this offering from Microgaming. It’s a real carnival treat and ensures that you’re entertained from start to finish.