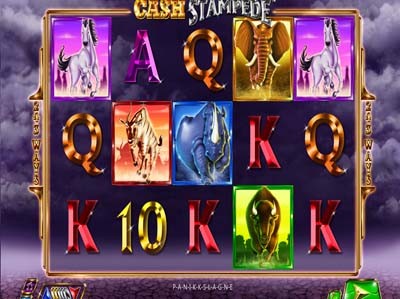 Cash Stampede from NextGen Gaming opens with a piece of music that could be from a great adventure film and takes you right into the action. The reels are filled with a variety of different animals, ranging through rhinos, elephants, horses, antelopes and bulls, all of which are in mid-charge – or stampede. Alongside these are standard A, K, J, Q and 10 symbols, and the game itself features some wonderful animations and graphics.

There’s a five reel layout with three rows, and a total of 243 ways to win. In addition, the wager you’re able to place on the game is able to be changed by altering the coin value. This starts from the minimum of £0.01 and increases up to £2.00, and altogether, this enables you to place a maximum wager of £50 per spin. There’s also the option of using the autoplay button to spin the reels up to 100 consecutive times at the same bet amount.

This game features a wild symbol, which is represented by the title logo. This appears on reel three only and wild substitutes for all symbols except scatters.

Any winning combination that includes a wild symbol and animal symbols will trigger the Cash Stampede Re-spins. Any additional triggering symbols that appear trigger another Re-spin. The more symbols that join the stampede, the bigger your wins will be.

The scatter symbol is represented by the coin that has the word, ‘BONUS’ written on it. You’re able to claim eight freespins when three of the scatter symbols appear anywhere on reels two, three and four. During freespins, the wild symbol is held in the middle position of reel three, increasing your win chances.

Cash Stampede is an entertaining game, thanks to its visually pleasing animations and exciting special features.