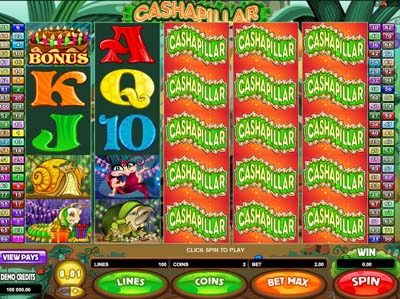 If you’re looking for a slot game with a bit of a different twist to the majority of others out there, Cashapillar is definitely the way to go. How endurable the twist is lies in the eyes and hands of the beholder, but this one will certainly keep you intrigued, for sure. Its reels are filled with various different garden bugs and creepy crawlies, such as wasps, beetles, snails and ladybirds. In addition, you’ll have a quirky piece of music playing along at the same time as you play, which is almost reminiscent of something played to introduce a children’s TV programme.

The game itself is presented as a five reel product, which also has five rows and a total of 100 separate pay lines. These can be customised to your own preferences, allowing you to wager on less if you prefer. The coin value is also able to be changed, ranging from the minimum of £0.01 up to the maximum of £0.05 per active line. Furthermore, the amount of coins used per round can be changed from one up to its maximum of 10. Therefore, an overall high wager of £50 is able to be played per spin.

The game features a wild icon, which is the Cashapillar logo. This stands in for other icons to make a win and will also double the pay out for it. This symbol appears stacked on every reel of the game as well! The only symbol that it won’t substitute is the scatter.

And the scatter is represented by a big birthday cake with many candles in it. Three, four or five of these appearing will activate a total of 15 freespins, and if the wild icon comes into play at any time during this round, you’re able to win up to six times your line bet. All freespin wins are tripled as well.

This product from Microgaming has an altogether odd looking layout and an increased number of pay lines to the standard slot game. However, if you’re able to work past this, then there’s no reason that this couldn’t be considered an ideal game to play.