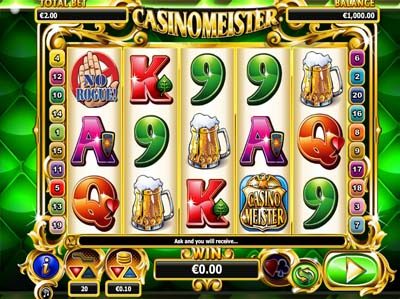 Welcome to the game of Casinomeister, brought to you proudly by NextGen Gaming. This product brings you an almost gritty edged game, providing imagery of loud nights in the local pub, filled with smoke and alcohol. As such, you’ll find that there are icons on the reels of tankards full of beer, what would appear to be an aggressive biker, the odd addition of a robot, a gold medal, and the regular video slot icons of A, J, K, Q, 10 and 9. Every spin of the reels will offer up a nice guitar riff, while any icons included in a winning combination will be pleasantly animated.

There are a total of five reels and three rows included in the layout of this one, while NextGen have also added 20 separate pay lines into the game as well. These can be customised to suit your own personal preferences, if you should so enjoy wagering on fewer. Further to this, gamers can opt to alter the amount that they gamble per round, which has a range starting at £0.01 and going right up to the maximum of £2 per active line. Therefore, you’ll be able to place a maximum overall bet of £40 per spin.

The biker acts as this game’s wild symbol, and as such, it will substitute for all other symbols on the reels, with the exception of scatters. Furthermore, if you’re wagering the highest amount and you manage to spin five wilds onto a pay line, you’ll receive a maximum pay out of £10,000.

The robot, also known as the ‘Vortran’ icon, is the game’s standard scatter symbol. This pays out wherever it appears on the lines, and all wins featuring this symbol are multiplied by the amount staked. Should three or more of these show up, you’ll be granted a round of unlimited freespins. All prizes will be tripled during the round. When the ‘Rogue’ symbol makes an appearance, you have five freespins remaining of the round. If, during this round, the ‘Behind Bars’ icon appears, the freespins round is re-triggered. This feature ends when the ‘Behind Bars’ icon does not appear.

Casinomeister provides a relatively fresh looking game, which has the great unlimited freespins round included, as well as some nice graphics and animations.