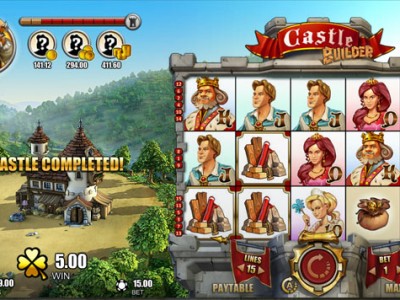 If you can say one thing ultimately about Castle Builder, it’s that it sits in a league of its own when it comes to slot games. This product merges the thrill and excitement of a slot game with the same kind of charge that a player would get from playing something like The Settlers or Rise of Nations. It’s your goal to build a castle, and you do this by spinning the reels and hopefully creating winning combinations made up of building materials. These come in standard, bronze, silver and gold status, but more on those a little later.

The slot game reels are filled with not only building materials, but members of supposed royalty, who will inhabit the castle once it’s built, alongside their ornately decorated treasure chests. The layout of the reels is a standard five by three rows, and there’s a total of 15 paylines included as well. All players can switch the amount of paylines that are active, and the coin value can be altered between £0.01 and £1.00 per line, offering up a maximum wager of £15.00 per spin.

There’s a wild symbol included in the game, represented by the knowledgeable, old builder, and he’ll stand in for other symbols to make a winning combination, except for building symbols.

Once a castle has been completed, the king’s heir moves in to it and has to select from three admirers. This decision will determine whether the heir is matched with a poor admirer, average admirer or a very rich admirer, with each one providing a small, medium or large payout.

Castle Builder is without a doubt an intriguing game to play. The whole construction element of the game merged with the slot layout, as well as the added extras make it a riveting product.