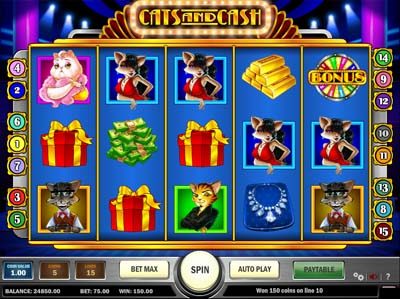 Have you ever thought about playing a game that merges a gameshow with the lifestyle of a cat? Yes, neither had we prior to playing Cats & Cash. However, the game features reels filled with various different cats dressed in finery, who act as the gameshow’s hosts and competitors. Alongside these icons, you’ll also find a goldfish in a bow, stacks of money, a gift box and gold bars.

Cats & Cash provides a five reel, three row game, which includes 15 separate paylines. Wagers can be placed across the 15 lines, or if you prefer, you can customise these to bet on less. The game’s coin value is able to be changed between £0.01 and £1.00 per line. Furthermore, players can play between one and five coins per round, offering up a total overall maximum bet opportunity of £75.00 per spin.

The gameshow host, dressed in his purple suit, provides this game with its wild symbol. This doubles all wins and substitutes for every symbol on the reels, except for bonus and scatter symbols.

In addition, there are two bonus symbols, represented by the gift box and the wheel of fortune. The gift box symbols trigger the Pick-A-Box bonus round, while the Wheel of Fortune bonus game is activated by its mutual symbol.

Cats & Cash is an amalgamation of two very different themes, one being animals and the other being a gameshow. However, the quirkiness of this product and its included bonus rounds and features make it exceptionally compelling and a real treat to play.