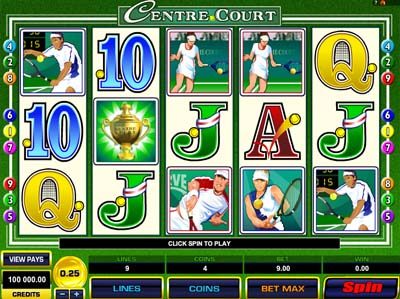 It’s already clear enough from the title of the game what it’s based on, but for those without that ability to deduce that, it’s a product centred around tennis. As such, the reels are filled with tennis ball and tennis net-decorated A, J, K, Q and 10 icons, as well as various images related to the sport, such as trophies, balls and male and female players. And, every time you spin the reels, you’ll get the fairly stressful sound of a tennis ball being hit back and forth coming through your speakers.

Centre Court offers up a five reel layout, and a total of three rows to go alongside. Nine pay lines have also been integrated into the game for players to wager on, and these are fixed in position. The game’s coin value is able to be altered between the minimum of £0.01 and the maximum of £1 per pay line, while the amount of coins used per round is changeable from one to 10. This allows for a maximum overall wager of £90 per spin to be played.

The close up of the tennis ball acts as this game’s scatter icon, and spinning three or more of these onto the reels during the main game will trigger 18 freespins. A multiplier of up to times five is also included in the round.

In addition, the trophy icon acts as the game’s wild symbol, and this will substitute for all other symbols except for the scatter. The symbol is also stacked during the freespins feature of the game.

Finally, you’ll also find a gamble feature in the product, which comes into play after every win achieved. This requires you to guess the colour of the playing card, and if you do, your winnings are doubled.

This game, while providing a nice theme throughout, could benefit from a great bonus game, rather than just offering the standard freespins and wild icons. However, apart from that, players can have a fun few rounds on it.