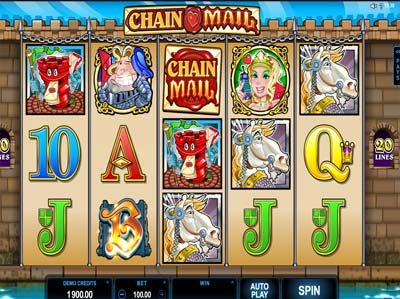 Whenever you think of chain mail, you think of a piece of post that goes from one person to another and onwards. Or, you might think about the armour that a knight might wear. Well, this game manages to incorporate a couple of features of both of those ideas, but also brings in some complete nonsense at the same time. You see, you’ll find an icon of a postbox with a piece of mail in it, and you’ll also find a knight in shining armour, but the rest of the symbols are all food-based! There’s a chocolate bar, an ice cream with a crown on, a kebab, a bucket of chicken and a pizza. Additionally, there’s the icon of the knight’s horse and another of a woman who is called Princess Roxy.

One thing that isn’t so different to the norm is the layout of the game, which presents you with five reels and three rows. Microgaming, the slot machine developer, has also incorporated a total of 20 different win lines, but these can be adjusted to suit your own personal preferences with the ‘Select Lines’ button. You can also adjust the amount that you wager per spin, which is done firstly by altering the value of a single coin between £0.01 and £1. You can also change the amount of coins played per line between one and five. Therefore, a maximum bet of £100 per spin.

Even though there appears to be some sort of inconsistencies with the overall theme of this one, Chain Mail does have one or two specialities incorporated into it, ensuring that you’ll still be entertained by playing it. The first of these is the wild symbol, which is represented by the game’s logo. Functioning as  a wild, this symbol will substitute for all other icons, with the exception of the scatter and bonus offerings, and it will double your win pay out as well.

As far as the scatter symbol is concerned, this is represented by a bag of post. Scatter wins are multiplied by the total bet placed, and they’re added to pay line wins. Five of them appearing in any location will see you receive a maximum win of 100 coins.

Finally, the bonus icon can appear on reels one, three and five, and should three of them come in to view, you’ll trigger the ‘Castle Bonus’ round. In this round, you simply need to select doors in the castle to open, which will reveal either coin wins or character icons. Should you find Princess Roxy behind one of the doors, she’ll ensure that you win all values in the row of doors. Uncle Mordred making an appearance will end the bonus round.

We can’t really explain our feelings towards Chain Mail, because while it does have some intriguing features and, generally, offers up good game play, we’re not entirely sure what the idea behind its theme is here.