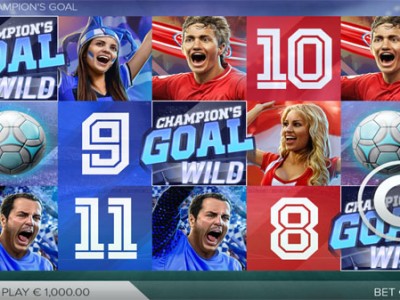 It’s very clear that football is the game in the spotlight in this game. That much can be discovered from the name of the product. However, the introductory video package further highlights that, including a very adept soundtrack before you’re introduced to the reels, featuring football players, fans, footballs and other such thematic imagery. The game itself is very beautifully designed, and provides both a visually and aurally appealing game.

There’s a total of five reels on offer, as well as three rows. You’ll also notice that the game features both blue and red symbols, with blue icons paying left to right and red symbols right to left. There’s 20 paylines incorporated into the game, and 12 separate bet levels available. These bet levels can be changed between the minimum wager of £0.20 per spin, up to the maximum of £100 per spin.

This game by Elk Studios provides a nice selection of added perks, such as the Champion’s Goal wild symbol, represented by the game’s logo. This will substitute for other symbols on the reels, except Ball, Trophy or Referee symbols, in order to make a winning combination.

What’s also great about this game is that it offers up several different betting strategies, such as the ‘Jumper’, which increases your bet by one level at a time for every time you win. Or, there’s the ‘Leveller’, which raises you two bet levels after five consecutive losses.

There’s also the Derby Freespins, which are triggered by three stacked Trophy symbols. If the football appears during the freespins round, it triggers Free Kick, and the following win is multiplied by five. Every scattered trophy symbol provides an extra freespin. And the appearance of the Referee icon triggers Sticky Corner, which is a re-spin with a sticky wild symbol in each corner.

Then there”s Cascading TIFO, activated by a selection of 3×3 symbols from the same team. This provides three extra rounds and possibilities to win big.

Champion’s Goal is a novel game that takes the football theme and runs with it to offer up a very intriguing slot product.