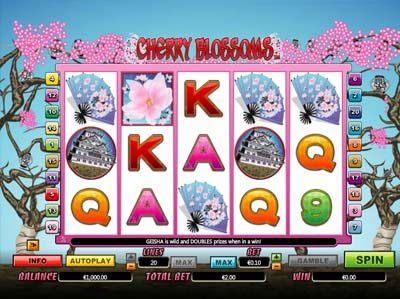 Cherry Blossoms takes you to the heart of Japan, introducing you to reels which are surrounded by the famed tree. There’s a wonderfully oriental sounding piece of music that plays every time you create a winning combination, and you’ll see authentically themed icons on the reels as well. Such symbols include a decorative fan, a huge bell, a lantern with Japanese characters on it, a pink water lily, and an icon of a traditional building. There’s also a painted geisha upon the reels as well.

The interface of this product is made up of five reels and three rows, while NextGen Gaming have also added a total of 20 different pay lines alongside. These are completely customisable, allowing you to wager on as many as you choose, while the bet you place per round is also able to be adjusted. This ranges from its minimum amount of £0.02 up to its maximum level of £4 per active line. Therefore, all players have the chance to place a max wager of £80 per spin. An ‘Autoplay’ button has also been added to allow several consecutive spins at the same bet amount.

There’s a couple of different specialities included within this game, starting with the wild icon, which is represented by the aforementioned geisha. This acts as a stand in for any other symbol on the reels, except for scatters, in order to create a winning pay line. And speaking of the scatter icons, these are represented by the previously talked about water lily. These pay out wherever they appear on the reels, and if you should spin three, four or five onto them, you’ll trigger the freespins round. Depending upon the amount of scatters appearing, you’ll receive 15, 20 or 25 freespins. Any wins during this round which also include the geisha icon will be multiplied by six. Freespins can be re-triggered during the round as well.

Cherry Blossoms is one of NextGen Gaming’s more intriguing products, offering up a great theme, interesting icons and animations, as well as compelling game play.