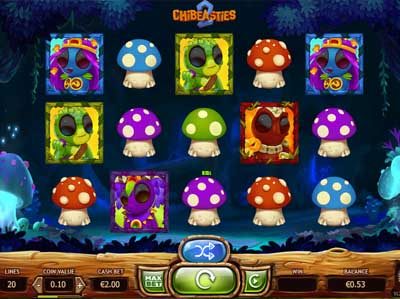 Chibeasties 2 is a quirky new slot game by developer Yggdrasil that has its very own unique theme. It is a sequel to an older game by this developer that first introduced players to this magical world of strange creatures and odd vegetation. Only, unlike its predecessor, Chibeasties 2 boasts far more advanced graphics, with a cool animated backdrop. On top of it all, you will also notice that you have more flexibility and as you take advantage of that flexibility, the backdrop will change. We will get into more detail about this later, but you will be able to freely move through different realms in this game. Each will offer its own special feature, in addition to a new setting. What they have in common is that they are somewhere in the great outdoors, typically between two large trees. The soundtrack here is also fairly pleasant, offering a very calm and light feel. 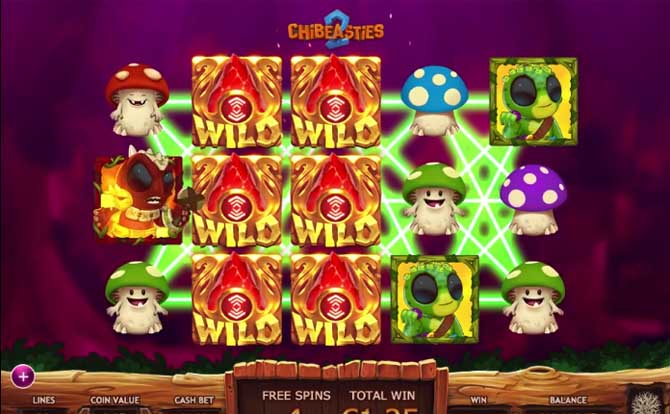 As for the symbols in this slot game, that is where the quirkiness begins. There are only 8 different regular symbols on the reels. First off are the four lower value symbols that come in the shape of mushrooms. Each mushroom has its own separate color, whereas the lowest value one is the green mushroom. Following it is the light blue colored one, after which is the purple and finally – the red mushroom. Next are our bug-eyed charming little creatures – the Chibeasties themselves. Just as the mushrooms, they each come in a different color to help you distinguish them. First is the green creature, following whom are the blue and purple ones. Finally, the red one will offer you the highest payouts of them all. As far as the setup goes, it’s just the regular grid of 5 reels and 3 rows. The total number of available paylines is fixed at 20 and you will have a betting range of between 20p and £100 per spin. The RTP here is fairly satisfactory at about 96.2%.

One of the biggest attractions of Chibeasties 2 is the fact that you can freely move across 4 different realms in the game. The layout will not change throughout them, only the backdrop will. And another significant point that will keep changing as you switch to the next realm will be the Wild feature. Each realm offers a different Wild feature. The Expanding realm, for example, comes in red and will see the Wilds expand to cover an entire reel. The green Teleporting realm will make sure the Wilds ‘teleport’ to the positions that will make for the biggest wins. Then we have the blue Spreading realm, in which the Wilds can create between 1 and 4 extra Wilds at random. Then last but not least, we have the purple Mirroring realm. It will see the Wilds ‘mirror’ themselves to opposite positions. As we pointed out, you can switch realms at any point during the base game by selecting the option on top of the Spin button. 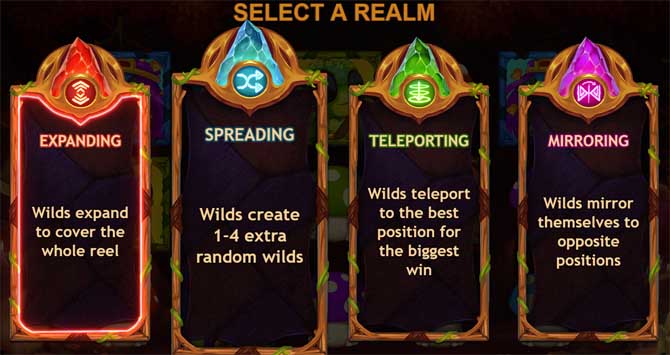 There are actually two more special features, other than this one. One of them is the Wild Mutation feature, which you can benefit from during the base game. This feature can become active at random after any winning spin that has Wilds on the reels. As a result, all the Wilds that have fulfilled the duties of their realm can then turn into Wilds from a different realm. That way you can win even more in a completely different way! These Wilds are called Combo Wilds. 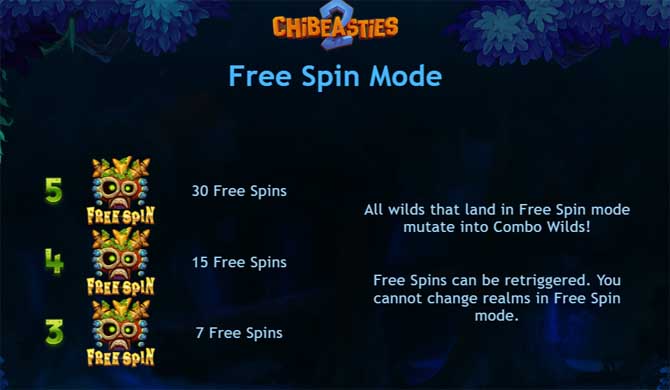 Last but not least, the third bonus feature this slot game has is the freespins bonus round. In order to trigger it, you will be looking to land at least three of the Scatter symbols. It’s hard to miss, as it looks like a crazy face and not quite like the other creatures on the reels. The number of Scatters you land will affect the number of freespins you can benefit from. Thus, the minimum of 3 Scatter symbols will grant you a total of 7 freespins. Likewise, if you land 4 Scatter symbols, you will receive a total of 15 freespins. And the maximum number of freespins that you can aim for is 30, which you will receive for 5 Scatters. What’s more though, you can retrigger this feature for extra free spins. And that’s not all. During the bonus round you can also enjoy Combo Wilds, meaning that all Wilds will offer you winnings as per the realm you are in. But they will also give you wins as per another realm!

Chibeasties 2 is a perfectly balanced slot game that offers a unique atmosphere and wonderful visuals to go with it. It’s heaps of fun on the one hand and can also make for some very decent wins, on the other. We would label it as a medium variance slot machine, with a decent RTP of 97.20%. One really cool feature in this machine is the “select a realm” feature, where you can choose between four different realms. It can be a bit hard to decide which one to go for, but we would recommend you to go with the expanding realm, as this gives you the opportunity to get a full screen of wilds (if you are lucky). Give it a few spins and see what realm you prefer, it might not be the same one as our favorite.