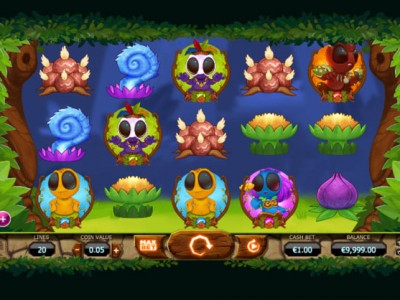 Enter a world of mystery and intrigue where you can witness the Chibeasties adorn the reels of this game. These little alien creatures present an altogether alternative, but nonetheless cute form of animal. Alongside them, the reels are host to some native plant life, including a bulbous, purple shrub, a furry, blue tail-like plant and brown and white miniature tree.

There’s a total of 20 paylines to wager on in this game, which has a layout of five reels and three rows. Yggdrasil Gaming has also provided coin values between the minimum of £0.01 and the maximum of £2.00 per line. Therefore, anyone playing this game can expect to have the chance of placing a maximum overall wager of £40.00 per spin. A serene and calming soundtrack will accompany you on your reel spinning journey with this one, too.

The game has a freespins symbol, represented by what appears to be a pair of glasses made out of wood. Three or or more of these appearing on the reels will trigger the game’s freespins mode, with three giving you 10 freespins, four giving you 20 freespins and five giving you 40 freespins.

When you enter the freespins mode, one symbol is randomly chosen to be the expanding symbol in the round. Every time such a symbol appears during the freespins round, it will automatically expand to cover the whole reel. The wild symbol also has the potential to be selected.

There’s also a wild symbol, which is represented by a blue stone wrapped in branches. This will act as a stand in for any other symbol on the reels when creating a winning combination. The only exception to this is the freespins symbol.

Chibeasties definitely has the entertainment value there right from the get go. The symbols themselves are very appealing, and gameplay has all the makings of a great slot with additional and intriguing extras.