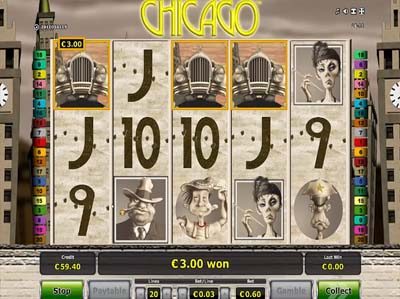 Chicago is a slot game brought to us by Novomatic. The design mimics a black and white movie, set in the 1920s or 30s. Aside from the bright yellow title, the only specks of color are those of the paylines. On the reels you can see the typical mobster character, smoking a cigar, as well as the sheriff and a grumpy police officer.

The game is a 5 reel, 3 row slot with 20 possible paylines. The RTP of a mere 95% might disappoint you a bit, but that shouldn’t stop you from giving these reels a spin. Especially with the special features it offers, this might just turn out to be your game.

To begin with, let’s have a look at the games Wild symbol. It looks like a magnified image of a couple of skyscrapers reaching up to the clouds. You can’t miss it, because it has the name of the game in bright yellow on it. This is the highest paying symbol in the game and it can replace any of the regular symbols to make up a winning sequence. Naturally, this doesn’t apply to the Scatter symbol. If you land a combo of 5 Wilds, you can win 500 times your stake (with a 10x multiplier in the bonus feature this would be 5000x).

The Scatter, on the other hand, features the front of a fancy car and the orange colored Chicago sky. This symbol is the one that triggers the game’s most interesting special feature – the Bottle Shooting Bonus. What’s more, it also grants you 12 freespins. If you can land three or more Scatters anywhere on the reels, they will activate the feature.

So, the point of the feature is that every winning freespin will trigger the Bottle Shooting Bonus feature. In it, you will need to aim and fire at bottles, the number of which you hit will determine the multiplier for your win. The more you shoot – the higher the multiplier will be, the highest of which can be 10x. 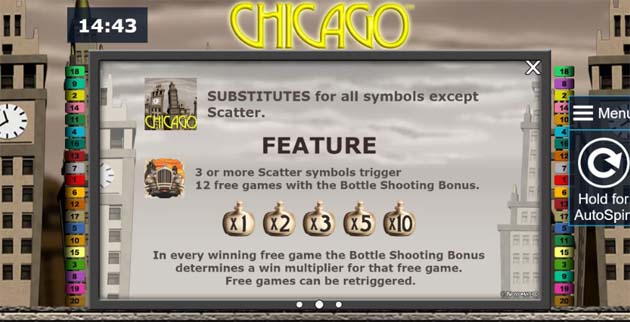 Furthermore, you can also retrigger this bonus, which can make for even bigger wins! And last but not least, there’s Gamble feature, you can take advantage of, too.

Each winning combination will grant you the option of doubling your wins, or, alternatively, losing them altogether. To try your luck, after you’ve spun a winning sequence, select the Gamble button. A new screen will present you with a deck of cards and your goal will be to correctly guess the color of a card that will be randomly drawn from it.

Your first correct guess will let you double your wins, after which you can either take them and leave, or continue gambling the amount to receive a 5x multiplier. The choice is yours.

Overall, we really like Chicago. True, the freespins feature might prove to be a bit difficult to trigger. However, even despite this fact, it’s a high variance slot game with great winning potential. And it’s certainly among the most fun and entertaining slots by this provider. More scatters are added to the reels during free spins, so while it can be hard to trigger the bonus initially, it is much easier to get a re-trigger during the free spins. As with other Novomatic slots, the free spins feature on Chicago is very exiting and has the potential for some really big wins.