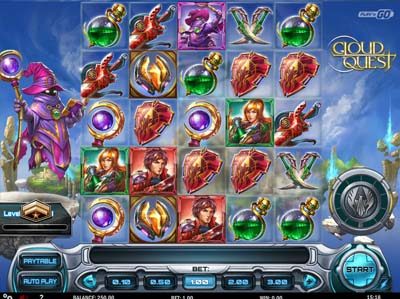 Cloud Quest from Play’n Go is set to bring you all the action and thrills of a 90s video game upon a slot machine interface. It would look very much at home being played on a Sega MegaDrive – although with a few graphic enhancements here and there. It’s almost akin to one of the Final Fantasy games that frequently have the gaming community all abuzz. On these reels you will find the various different icons, which exist in the form of video game symbols. There are warrior weapons, shields, magicians books and potions. In addition, there are three warrior icons who will do battle on the reels.

The design of the game is offered up on a five reel and five row layout, and while most slot games have a multiple amount of pay lines, this one has the simple rule of you needing to match three or more symbols in either a diagonal, vertical or horizontal way to win. Players cannot adjust this particular setting, but there is the chance to change around the value of the wager that you place. This is done simply by selecting one of the bet values displayed across the bottom of the screen. There, you can select between a minimum of £0.10 and a maximum of £40 per spin.

There’s a power stone symbol included in the game, and this fills a power meter, giving you the chance to trigger Super Powers. In addition, if you clear a row and reveal all of the ‘BONUS’ letters, you’ll enter the bonus round of freespins. These are just two of the game’s special features.

However, there are even more features included in this game, such as the wild icon, which will substitute for any other symbol on the reels in order to form a winning combination.

As far as the previously mentioned Super Powers addition is concerned, this sees you presented with a re-spin and a random power will trigger if the arrow stops on the highlighted section of the circular amulet. Various different powers exist there, such as ‘Five of Fortune’ where all wins are multiplied by five, ‘Scatter of Success’ where all symbols will pay out scattered, and ‘Mark of Multitude’ where all winning combinations create wild icons.

Finally, the bonus round mentioned sees you spin a three reel by one row set and you start with five to 20 freespins. Every time you defeat a monster (hits are given when you form a win), you’ll be provided with three extra spins. You’ll also see your chosen hero level up during this round.

Cloud Quest could actually be considered as one our favourite game from this developer. It’s crammed full of special features and exciting game play. The return to player on this slot machine is 96,52%, which is fairly high.