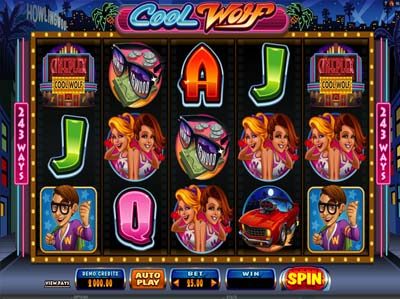 Cool Wolf is basically a tale that takes place in Howlingwood, and rather than come across as vicious and man-eating, the canine in this game is suave, sophisticated and wearing the trendiest outfit that money can buy. Of course, this isn’t just any old wolf, but a werewolf who has transformed from a high school nerd. As such, each of these characters takes pride of place as an icon in the game, while others include the two cheerleader-like girls, a flashy red sports car, a cinema building showing a film with the same name as the same, and a pair of sunglasses resting atop some money notes. These are also joined by the A, K, Q and J symbols.

As far as the general interface of the game is concerned, Cool Wolf is a five reel and three rows slot machine, and the developer has also included 243 ways to win. This is not something that you’re able to customise, but you can change how much you wager per spin. This is done by adjusting the coin size between £0.01 and £0.50, and by switching the number of coins in play. This allows you to bet a maximum overall bet of £250 on the reels.

The logo of this game is what provides it with its wild icon, which will stand in for any other symbol on the reels in order to form a successful combination. These will appear as stacked symbols on three different reels, and there’s also the addition of something known as the ‘Howling Wild Feature’. This sees reels two, three or four turn completely in to a wild column with a guaranteed win.

The scatter is represented by the golden cinema tickets, and this particular icon will pay out wherever it shows up on the reels. Furthermore, if you spin between three and five in to view, you’ll be given a total of 15, 20 or 25 freespins, respectively.

The game also includes a function known as ‘Rolling Reels’, and this comes in to play following a winning combination being formed. All icons included in such will disappear to make room for new ones, and in the process, it gives you the chance of forming multiple wins with up to a 10 times multiplier included.

This slot game from Microgaming is definitely filled with entertainment for the ages. It’s quirky, it’s fun, and it’s special features keep you coming back for more.