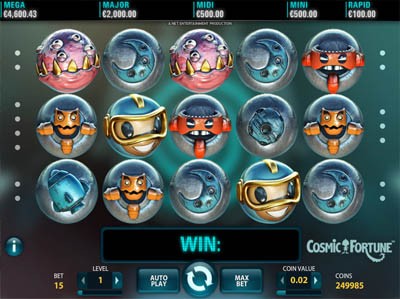 It’s cosmic. It’s fun. It’s outer space. And, it’s filled with a progressive jackpot like you wouldn’t believe! It can only be one thing, Netent’s brilliant game, Cosmic Fortune.

As the opening video package details – in retro pixelated Atari fashion – the world is invaded by a bunch of alien creatures in UFOs, and there’s only one person who can stop them. That person is busily listening to his music while sat in a delivery truck, but is soon turned into the fighting hero that is seen on the reels shortly after. Accompanying him there are icons of a rocket ship, a moon, an asteroid, and various other characters which appear to be metallic robot aliens of some kind.

The interface of this game provides five reels and three rows, while the pay lines that have been added stand at a fixed 15. A piece of computer-sounding, but altogether space age music also accompanies your game play, adding to the atmosphere and proving how extra details matter. Players can change the coin value of the game from £0.02 up to £0.50 per pay line, while the bet level is also alterable from one to 10. This allows an overall maximum wager of £75 to be placed per spin.

The first interesting feature you’ll probably experience in this one is the Avalanche Reels. These allow any winning combination to disappear from the reels and make way for three or more extra ones to come in and fill their place, offering up further chances of creating additional combinations from a single spin.

The game has scatter icons in the shape of gold balls with a lightning strike running through them. Three of these appearing anywhere on the reels will activate 10 freespins, or free falls as this game calls them. Each additional scatter appearing during the main game provides five extra free falls. During this round, all symbols on winning lines are transformed into marbles.

At the end of the free falls round, a bonus game is triggered. The marbles you collected previously will fall from the top and land randomly in a ‘Coin Win’ cup or the ‘Jackpot Collector’ cup. If you fill the latter of these with three marbles, the ‘Jackpot Game’ is triggered. This can provide a coin win, or one of the five different jackpots displayed above the reels.

Finally, there’s also a wild symbol which appears in both the main game and freespins, and this stands in for all other icons to make a win, except scatters.

Cosmic Fortune is a great addition to the Netent portfolio of products, offering up a myriad of extras as well as progressive jackpots that are all to play for.