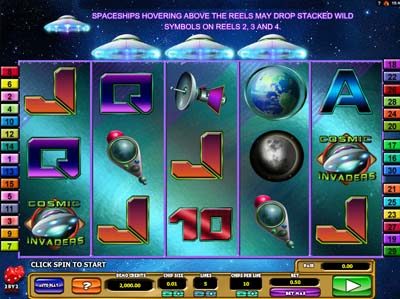 Designed and powered by Microgaming, the Cosmic Invaders slot game takes you into outer space, offering up a look at the sci-fi and otherworldly images of such. It also includes an electronic piece of music, which triggers every time you spin the reels. Upon the reels of this one, you’ll find various different icons, but these begin with the A, J, K, Q and 10 symbols. There’s also the addition of symbols of the moon, another of the Earth, a satellite, another space device, and additional special icons, which we’ll get to later.

The gaming interface is presented on a five reel and three row layout, so everything should look familiar enough in this instance. Microgaming have also added a total of 30 different pay lines, but you can adjust these to suit your own personal preferences, simply by using the relevant plus and minus buttons. Additionally, you can also change around the value of the wager that you place, starting with the value of a single coin, which changes between £0.01 and £0.25, while the amount of coins able to be played per line is changeable between one and 10. This allows a maximum overall wager of £75 per spin.

The game includes a few different specialities, starting with the symbol of the green alien. This acts as the game’s wild symbol and it will substitute for all other symbols on the reels in order to form a win. The only exceptions to this rule are the scatter and bonus icons, and if five wilds show up on a pay line, you’ll receive a maximum pay out of 1,500 coins.

As far as the scatter is concerned, this is represented by the purple-coloured alien. If you spin three, four or five of these icons into any location on the screen, you’ll receive a reward of six, seven or eight freespins, respectively. For each freespin, one of the entire reels two, three or four will become wild.

UFO symbols also appear in the game, they can appear scattered on reels one and five, which will trigger the ‘Alien Picking Bonus’. When triggered, a pick screen with five aliens is displayed and you need to pick one of them. This will then reward a prize.

This one is a nicely designed and crafted game, and it features intriguing special features alongside too. A nice addition to the Microgaming catalogue.