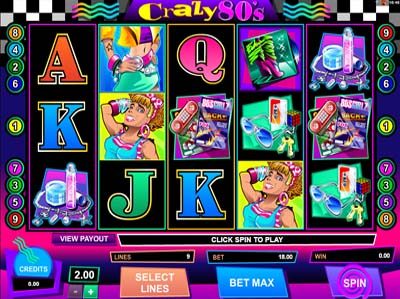 If you were alive in the Eighties, you’ll know what a sublime decade it was for many things. From music through to cars and TV shows, it was certainly a redefining era of the 20th century. And now, with the Crazy 80s slot game from Microgaming, you can relive all that splendour of the age. Upon the reels of the game, you’ll find various different symbols, starting with the A, J, K, Q and 10 icons. Joining these are more thematically relevant symbols, starting with a selection of make up and jewellery, followed up by another of a Rubik’s cube keyring with some sunglasses. Another symbols is provided in magazines and a telephone, while the remaining two show some of the era’s fashion.

There’s a total of five reels and three rows included in it too, while Microgaming have additionally incorporated a total of nine different pay lines. You can customise these to suit your own preferences, and you’re also able to adjust the value of the wager that you place per spin as well. This starts by changing how much a single coin is worth, and this offers up a range of between £0.25 and £10, which will therefore allow a maximum overall wager of £90 per round to be played.

Further to the standard design of the game, there are a couple of special features incorporated into it. This begins with the standard wild symbol, which is represented by the stereo player. As a wild icon, this will stand in for all other symbols with the exception of scatters, in order to form a win.

And speaking of the scatter icon, this is represented by the vinyl record cover. As a scatter it will pay out in any location, and all scatter wins are added to pay line wins. Should you spin five of these in to any location, you’ll receive a maximum pay out of 50 times your wager placed.

The Crazy 80s certainly was a decade to remember, and it’s immortalised very nicely in this offering from Microgaming.