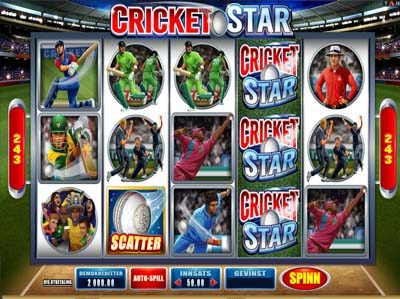 Cricket has never really been what one could call an exciting sport, but all that changed when Microgaming launched their Cricket Star game. This takes you right into the thick of the action, giving you any and all thrills that the game might bring. You’ll find a variety of different symbols incorporated into the reels, some of which show various cricketers in action, as well as others associated with the sport, such as cricket balls and bats. And, you’ll get an even more authentic experience while playing this game, as the stadium forms the backdrop for your gameplay.

It’s presented up on a standard five reel and three row interface, meaning that it should look fairly familiar to regular gamers. The developer has also added a selection of 243 different ways to win, and this is not something that you’re able to change around. However, you do have the ability to adjust your wager, providing you with coin denominations of between £0.01 and £0.10. The maximum bet that you’re able to place stands at a total of 500 coins.

Additional special features have been added to this game in order to make it that bit more entertaining, starting with a scatter symbol, which is represented by the ball which seems to be flying through outer space! Three, four or five of these coming into view in any location on the reels will provide you with a pay out of 15, 20 or 25 freespins, respectively. The round also includes ‘Rolling Reels’, which can award multiple consecutive wins from a single freespin.

The game’s own logo acts as its wild symbol, and according to the paytable, you can spin more than 40 wild symbols onto the reels to boost your winnings. This one will also appear stacked on reels three, four and five, and it will stand in for any other symbol, except the scatter, in order to form a win.

Plus, there’s also the inclusion of the ‘Wild Wickets’ feature, and this is triggered completely at random. Should it become active, reels two, three or four will be turned into a wild with a guaranteed win added alongside.

This slot manages to take a fairly substandard sport and turn it into something exciting and appealing via plentiful special features and intriguing graphics.