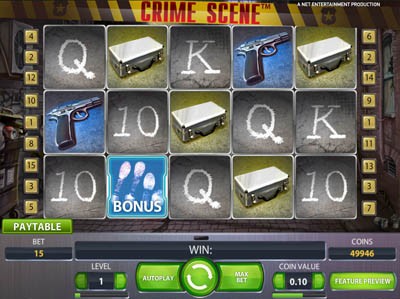 A murder has taken place on a back alleys of this city, and it’s your job to find out who the killer is! So, tape off the scene, get forensics in and solve the mystery. Acting as police detective, you’ll be presented with reels that are filled with various different tools and weapons to try and solve the case. A revolver left behind by the murderer. A set of speciality glasses to look for hidden clues. A bloody footprint that tells of the criminals shoes. A briefcase containing forensic items. All of these are present and ready to be put to good use.

The game itself provides five different reels and three rows, while a total of 15 fixed pay lines have also been integrated. Placing wagers on these lines is easy to do, with the possibility of changing the coin value from £0.01 up to £1 per line. You’re also able to switch the bet level from one to 10, resulting in you being given the chance to place a maximum overall wager of £150 per spin.

The policeman’s badge acts as the game’s wild icon, and should this appear on the reels, it will stand in for other icons to create the highest possible winning pay out, with the exception of bonus symbols. Not only that, but the wilds are also sticky, staying in their same position for up to five more spins.

The bonus symbol of the game is represented by the fingerprints icon, and three or more of these appearing on the reels will activate the bonus game. This sees you presented with various different computer files. You need to open them, and doing so will reveal one of several different outcomes. The first is a coin reward, the second is a piece of fingerprint evidence, which provides a higher coin win, the third is a red cross, which brings the round to an end. Once the bonus round ends, four envelopes are presented to you. Click on an envelope and you’ll win either additional coins, a double the winnings multiplier, or a second chance at the bonus round.

Anyone who enjoys television series about crime, or playing crime-themed video games will surely love this one. It has some nice added extras to it and entertains all the way through.