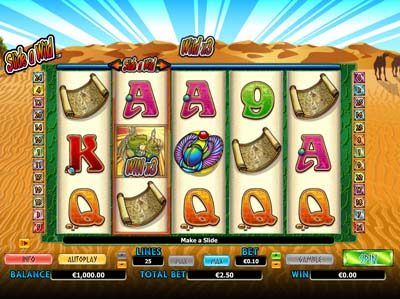 It’s time to return to Ancient Egypt with this game from NextGen Gaming – although you’re able to do it with an altogether more reptile-like feeling. This is because Crocodopolis’ main icon is represented by a crocodile Pharaoh! Alongside this, players will get the opportunity to view symbols of scarab beetles, ankhs, treasure maps, pyramids, and various incarnations of Pharaohs, from human to Horus. The game itself is set against a desert background, with two camels walking along to the right, as the sun is starting to rise over the dunes. What could be considered an Egyptian piece of music has also been included to play along with your every spin.

The game is played on a five reel and three row interface, and the developer has also added a total of 25 separate pay lines into it as well. These can be altered to cater to your own personal preferences, with the plus and minus buttons to the left of it acting as the switches. Furthermore, players are able to change the bet amount they place per round as well, which ranges from its minimum of £0.01 up to its maximum of £2 per active line. This allows a maximum overall wager of £50 to be played per spin.

Unsurprisingly, the crocodile-headed Pharaoh provides this game with its wild icon. In doing so, it will substitute for all other icons on the reels in order to make a winning combination, with the only exception to this rule being the scatters.

And speaking of the game’s scatter icon, this is represented by the shining pyramid, and appears only on reels two, three and four. Any three scattered pyramid icons appearing after a spin will provide you with a total of 12 freespins of the reels, and during this round, all pay outs are doubled.

You’ll also notice that during the main game, there is a slider bar at the top of the reels. This can be moved along to position the ‘Wild Croc’ on any of them, and presents each reel with a different benefit. If left on reel one, the pay out is doubled should the wild show and substitute in a win. Reel two will see the pay out tripled in the same circumstances. If you adjust the slider to reel three, this will see the Croc expand to cover all three positions if it appears. Placing it above reel four will see the prize tripled and the wild expand. And reel five will see all symbols on the reel replaced with Croc, plus the pay out tripled.

This is actually a well-designed and thought of game. It brings together a reptile and an Ancient culture into one great product.