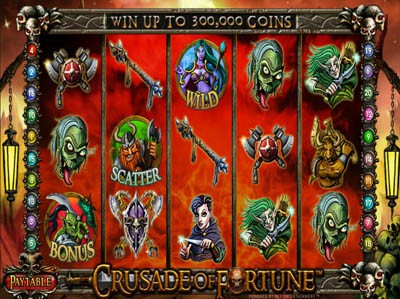 From its name, you’d be forgiven for thinking that Crusade of Fortune is a product based on daring knights doing battle in a jousting competition, or going on some long adventure to bring back treasures untold. Well, it isn’t. But, just because it runs with a goblins and wizards theme doesn’t make it any less interesting. In fact, it has wonderful game play. The reels are filled with various different weapons, ranging from axes and shields, through to spiked maces. Additionally, a few character icons have been integrated into them as well, including a scary goblin, a Minotaur, what would appear to be a crafty female sorceress, and a heroic dwarf, to name but a few.

The main game is made up of five reels and three rows, while a total of 20 bet lines have also been added. These are able to be customised, should you feel the need to place wagers on fewer. The coin value that is included in the game starts from a minimum of £0.01 and can be increased up to £0.20 per line, while the bet level can be changed from one to 20. Therefore, all players are able to place a maximum overall wager of £80 per spin.

The aforementioned dwarf character acts as the game’s scatter symbol, and when you spin three or more of these onto the reels, you’ll be on the receiving end of some freespins. A total of 10 are provided for three scatters, 20 freespins are offered for four scatters, and 30 freespins are given to you for five scatters. All wins during this round are tripled.

The sword-wielding female hero in this game is the wild icon. She acts as a substitute for all other icons on the reels, except for the bonus wins and scatters.

And the bonus symbol is represented by the gnarly, battle axe-wielding orc. If you should spin three or more of these on an active pay line, you’ll begin the bonus round. This sees you pushed into battle against the creature where you will need to claim as many strikes on him and defend against his attacks as best you can to win points. You have up to three rounds to be able to kill the orc, and if you manage to do so, you’ll be rewarded with bonus treasure.

This is another great game from Netent. It has wonderful graphics, a great bonus round, and with the addition of freespins and wild icons, players can’t be discontent with it.