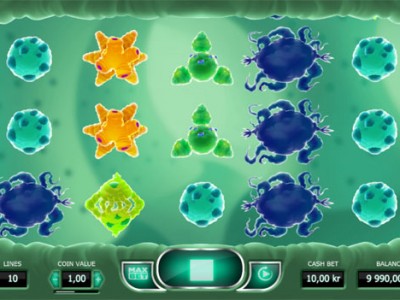 It might be a little off-putting at first to discover a game based on viruses, and judging by the shapes of some of the critters found on the reels, it’s not difficult to see why. They’re almost terrifying within themselves, and the game’s accompanying soundtrack does little to diminish such appearances. Cyrus the Virus appears to take place within the internal workings of an alien creature, with green tissue and body structures housing the various viruses.

The game itself takes place on a five reel, three row layout, which also incorporates a total of 10 pay lines to wager on. And speaking of wagers, coin values are able to be altered between the minimum of £0.01 and the maximum of £4.00 per line. This allows all players to place a maximum overall wager of £40.00 per spin.

The game includes a wild symbol, which appears to be an amalgamation of several viruses wrapped into one. This symbol will substitute for any other on the reels in order to create a winning combination. This symbol will only appear on the central reel, and should one show up, it will expand to cover the whole reel. It will also trigger a re-spin of the reels.

Also, while not being a special feature per se, the symbols on the reels often show up in stacked form, giving a slightly better chance of crafting several combinations at once.

This game doesn’t have a multitude of special features like many other slots tend to, and to be frank, it’s quite boring to play. Yggdrasil have far better games in their portfolio than this slot.