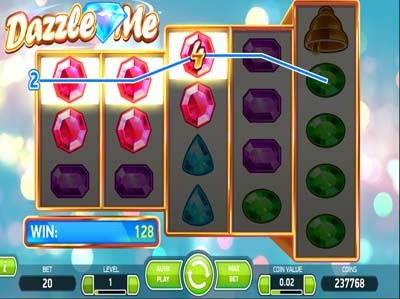 There’s a very 80s feel to the soundtrack that comes through the Dazzle Me game, but you’ll realise that there’s nothing retro about the reels and product itself when you start playing. The game itself provides a very graphically pleasing set of icons for players to appreciate, which are based around standard gemstones ranging in colour from blue, through to red and green.

The reels are set out in a unique way as well, with five of them altogether, but with stunted rows that are presented as three for the first two reels, four for the second two, and five for the final one. There’s a total of 76 pay lines also included. Meanwhile, gamers can alter the coin value from £0.01 up to its maximum of £1.00, while the bet level is also changeable between one and 10. This gives all players the opportunity to place a maximum wager of £200 per spin.

Dazzle Me incorporates Dazzling Wild Reels into its game play, and these will randomly appear during the main game as an overlay reel with only wild symbols. Between one and five reels can turn in Dazzling Wilds, and these wild icons will substitute for other icons on the reels to make a winning combination, except for the freespin symbols.

Freespin symbols can appear anywhere on the reels, and if three of these show up, you’ll be given eight freespins. If you spin four of these, you’ll be given 12 freespins, and managing to spin five will award you with 16 freespins of the reels.

During the freespins round, there is a Linked Reels feature. At the beginning of each spin, identical linked reels appear adjacently on any of the reels one through to four. The right reel becomes a cope of the left reel, with reel one linked to reel two, and/or reel three linked to reel four.

Dazzle Me doesn’t appear to have much of an interesting outlay when given a first look. However, its added features make it more than compelling and assists it in retaining its own sense of interesting game play.