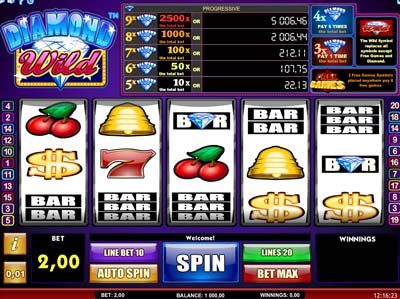 It’s great when you’re able to find a slot machine game that takes all of the thrills of a classic slot and merges it with several features of a modern day video slot to form an intriguing hybrid offering. Diamond Wild, offered up by iSoftBet, manages to do just that. It presents players with all of the regularly seen traditional slot icons, starting with the BAR, double BAR and triple BAR symbols. There’s also the icon of the bell, cherries, any BAR, the number 7 and the dollar sign. The game doesn’t feature the most upmarket graphics, but this is all to cater to its classic machine look.

The reels that you spin stand at five strong, and there are three rows incorporated as well. The developer has also added a total of 20 different pay lines, which is something different for a traditional game such as this. You can adjust the amount of these that are in play, simply by clicking on the numbers down the sides of the reels. You can also change your wager around as well, which is done firstly by switching around the value of a single coin between £0.01 and £1, while the line bet is changeable between one and 10. This allows you the chance to place a maximum overall wager of £200 per round.

The game, being entitled Diamond Wild, features a logo that presents the game with its wild symbol. As such, this will replace all symbols on the reels, except free games and Diamond symbols, in order to form a win.

The free games symbol acts as a scatter icon, and three of these placed anywhere will trigger a total of eight freespins. Winnings during this round are multiplied by two.

Finally, there’s the addition of the actual jackpot symbol, represented by the diamond itself. The more of these showing up on the reels, the higher your pay out will be, and if you manage to spin nine of them onto the reels, you’ll receive a total of 2500 times your total wager placed!

As noted, we enjoy the games that manage to merge both traditional and contemporary slots into one solid offering. And this iSoftBet game is just the ticket to playing such an option.