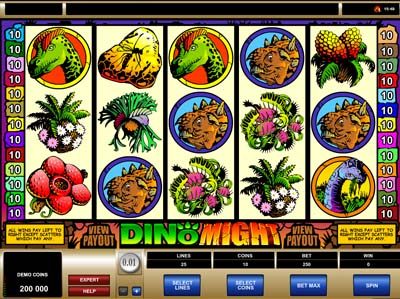 The age of the dinosaurs is, of course, long gone, but Microgaming would definitely have you believe that they’re still in existence, thanks to the Dino Might slot game. It takes you back to prehistoric times, featuring 2D – but very colourful – icons on its reels. These include various different plants and floral offerings from this period, such as the Venus Fly Trap and the Cactus. Five different dinosaur icons have also been included in the game as standard symbols, including the Diplodocus, the Triceratops, Ankylosaurus, Tyrannosaurus Rex and Edmontosaurus.

Whenever you play this game, you’ll be provided with a total of five reels and three rows, so everything is fairly standard as far as the layout is concerned. Microgaming have also added a total of 25 different pay lines, but you can change these with the ‘Select Lines’ button. You can adjust the amount of the wager that you place per spin as well, starting with altering the coin value between £0.01 and £1. You can also change the amount of coins that you play per line, with a range of between one and 10. This allows a maximum overall wager of £250 per spin.

There are one or two additions to this game, starting with the wild symbol. This is represented by the game’s own logo and as a wild, it will substitute for all other icons on the reels, with the exception of bonus and scatter symbols. Furthermore, it will also double your win when substituting.

As well as this, there’s the icon of an insect trapped in amber and this is the scatter of the game. Should three, four or five of these fossils appear on the reels in any location, you’ll trigger the match bonus round. Simply match four of the same symbols and you can win up to 20,000 coins. Locate the mighty multiplier to boost your winnings!

Finally, there’s also the inclusion of an extra dinosaur with frills on its head – known in this game as the Triggersaurus! Pick up three of these symbols to win up to 4,500 coins as part of the Reel Bonus!

Dino Might may not feature the world’s greatest graphics or base gameplay, but it does have some intriguing specialities and an overall intriguing theme.