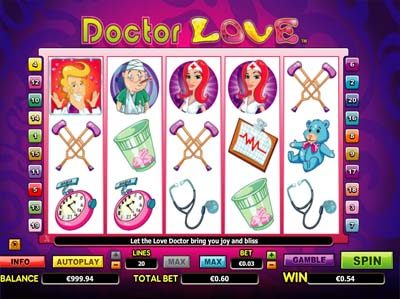 If you’re in need of some serious TLC, then why not visit Doctor Love. He’ll no doubt have just the remedy to sort out all of your aches and pains. As such, you’ll be taken right in to his world with this one, which features various different icons relating to the medical profession. These begin with an icon of some pills in a plastic cup, followed by a stethoscope and a pair of crutches. Then there’s a chart showing a patient’s progress as another icon, along with a nurse’s pocket watch and a bouquet of flowers from a well wisher. Finally, the remaining icons are made up of a plush, blue teddy bear, an ambulance, a patient with bandages around his head and arm, and one of the hospital nurses.

The game itself is offered up on a five reel and three row layout, and the developer, Microgaming, has also included a total of 20 separate bet lines. These can be altered to suit your own preferences, either by clicking on a number from one of the sides of the reels, or by using the plus and minus buttons in the ‘Lines’ section. Furthermore, you can alter the value of the bet that you play per round, and this is done by using the plus and minus buttons to the side of the ‘Bet’ box. There, you can choose from a range of between £0.02 and £5 per active line, giving you the chance to place a maximum overall wager of £100 per spin.

The icon of Doctor Love himself that has been included in this game will provide the wild symbol. As such, he will substitute for all other icons on the reels in order to form a winning combination, except for the scatter symbols. Should five of these make an appearance across an active pay line, you’ll receive a maximum pay out of 5,000 coins.

As noted, a scatter symbol is also included in the game, and this is represented by the love meter. This pays out in any location, with five of them multiplying your wager placed by a maximum of times 100. Should three, four or five of these show up scattered across the reels, you’ll be rewarded with 10, 15 or 20 freespins, respectively. All prizes in this round are tripled.

It’s one of Nextgen’s more well-known games, and it’s no surprise as to why. It has a great theme to work with, incorporates some stunning graphics and also has an intriguing range of special additions alongside.