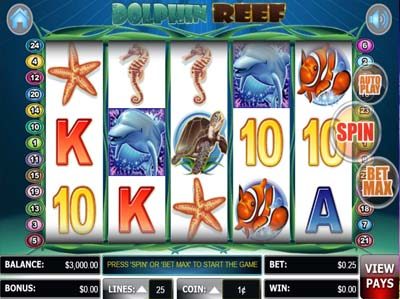 The squeaky sound of a dolphin calling out to its pod introduces you to this game, and in a quite a startling and slightly annoying fashion. However, we get that the theme of the game is dolphins, so we’ll let that one slide. Yes, this one takes you under the waves and into the ocean with a multitude of sea life appearing on the reels, including seahorses, starfish and turtles. You’ll also find sunken treasure chests have also been incorporated. While the graphics of the game are fairly nice, the inclusive sounds are very generic, not really providing any kind of overwhelming draw.

The game also has a standard layout, offering up five reels and three rows to players. You’ll also find a total of 20 pay lines have been included as well, although these can be altered to suit your own preferences. The same goes for the coin value, which is alterable from £0.01 up to £2.00 per active line. The amount you choose is then of course multiplied by the number of lines in play, and you have your total. In this instance, players can bet a maximum of £40 on the game per spin.

Of course, the icon of the dolphin is going to provide this game with its wild symbol. This can appear on either reel two or reel four, and if it does, it will stand in for any other symbol on the reels to create a winning combination, including the scatter icon.

The aforementioned treasure chest provides the scatter icon, and this pays out a bet multiplier if three or more appear anywhere on the reels.

Should a dolphin wild appear on both reels two and four, five held re-spins with expanded wild icons will be triggered, offering up more chances to pick up wins.

Dolphin Reef  from NextGen offers up a nicely packaged together game, although it lacks in any kind of relative sounds. It’s a great plus that the wild symbol stands in for scatters as well in this one though, and the re-spins round is a nice touch as well.