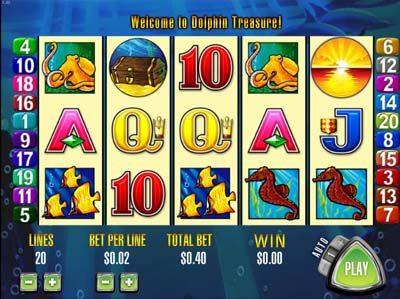 It’s clear to see that Dolphin Treasure is one of Aristocrat’s older products, thanks to its loss of any appropriate soundtrack, and its 2D looking icons. However, the product features rich, strong colours and interesting enough gameplay for such an aged product. As well as the obvious dolphin icons, the reels have symbols of turtles, octopuses, starfish and various other underwater animals. In addition, the game has a wonderful blue hue that just adds to the atmosphere and environment of the product.

There are five reels and three rows worth of a layout, while a total of 20 paylines have been integrated alongside. Players can only change the wagered amount by changing the amount of paylines that are active per round. With a single active payline, the total wager stands at 100 coins. However, with al 20 active, the wager increases to 2000 coins per spin.

The icon of the sunset acts as this game’s wild symbol and will substitute for any other icon, except for the scatter symbol.

The scatter symbol is represented by the treasure chest, and this will give you a win regardles of where it land on the reels. If three, four or five scatter icons appear on the reels, a total of 15 freespins are triggered. All prizes are tripled during the freespins round, and the feature can be re-triggered during it as well.

Any wins can also be gambled by selecting either the red or black gamble button at the bottom of the reels. In gamble mode, players need to select either black, red, or a specific playing card suit. The bet is doubled if you make a correct choice of colour, while it is quadrupled if your suit choice is correct.

Dolphin Treasure is a decent enough game, with several interesting extras and better-than-average gameplay for such an old product.