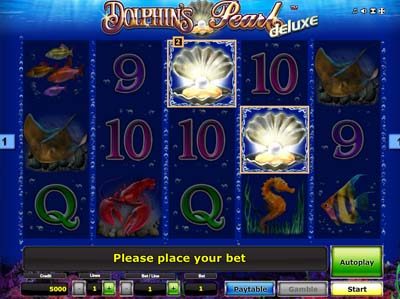 Yet another land based slot turned mobile, Dolphins Pearl Deluxe may look a bit old-fashioned, but perhaps classic would better suit it. As we’ve come to expect from Novomatic, Dolphins Pearl is a highly volatile, yet extremely lucrative machine. It has a 95.13% RTP (Return To Player) percentage, and a max payout of 9,000 times your initial stake. The bonus round is fairly fun, and can be rather easy to retrigger.

Cut to the bone, Dolphins Pearl Deluxe is a 5-reel slot with 10 active paylines. The number of paylines can be adjusted by the player; the least you can is bet one coin per line, per spin, which, translated into real money, comes to anywhere from 10p to fifty quid. Conversely, the most you can bet is 40 credits per line, or 400 total. Your winnings will be contingent not only upon your stakes, but also the symbol combos, as different symbols have different values. There’s no progressive jackpot, but the max payout can go up to 9,000 times your stakes. If you wish, you may do the maths now.

Special Features
The basic symbols, as per custom, are high value card symbols; in this case, these start with the nine. There are other symbols, all aquatic in nature – a school of fish and a single fish, a seahorse, a stingray, a lobster, an oyster with a pearl, and a dolphin.

Interestingly enough, five of these symbols have quite lenient winning conditions – the stingray, lobster, oyster and dolphin, as well as the number nine require only two symbols per line to produce a winning combo. Conversely, all of the rest need at least three matching symbols on active payline to count.
About the wild – should you get five of these during the basegame, you will receive 900 times your stake. Alternatively, four Dolphins will multiply your stake by 250. In a similar vein, five oysters (which is the scatter symbol) will multiply the stake by 500.

As you’ve probably already guessed, the Dolphin can replace any other symbol, save scatter, to produce a winning combo. Speaking of scatter, this symbols triggers the bonus feature of Dolphins Pearl Deluxe, provided there are at least three of these symbols anywhere on the reels. This activates 15 freespins, which can be retriggered as long as your luck holds.
While in the freespin feature, all your winnings are multiplied 3x. Moreover, whenever the dolphin appears in one of the active paylines, all your winnings are doubled, on top of the base bonus multiplier.

While we’re still on the topic of winnings, the game offers you a chance to double them by playing a game of chances. Of course, this has a particularly nasty downside – just as you can double your winnings, you can as easily lose them.

Summary
All things considered, Dolphins Pearl Deluxe is pretty much what we’ve come to expect from Novomatic – a fairly volatile slot with a substantial amount to win. On the other hand, you may play for hours on end without winning anything major.