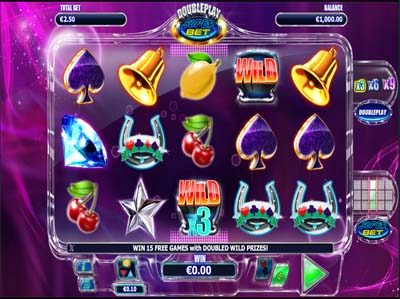 This product offers up classic symbols of a slot game, so you’ll be presented with a selection of strawberries, lemons, stars, bells, plums, cherries and 7s, as well as the addition of diamonds, horseshoes and the playing card suit of spades. There’s also a relaxing, electronic soundtrack included to accompany you as you spin the reels, and one or two extra special features to make gameplay more interesting.

Double Play Superbet offers up a five reel, three row interface, and provides a total of 25paylines. The coin value of the game is able to be altered between £0.01 and £2.00 per payline. This offers up a total maximum wager of £50 per spin, in general. Furthermore, to the right hand side of the reels, there’s two alterable options of ‘Doubleplay’ and ‘Superbet’. The first option allows you to multiply your wager from times three to times six and then times nine. The second doubles your wager each times it’s increased, allowing you to place a total maximum wager of £600 per spin.

The game has a wild symbol, which substitutes for all symbols on the reels, except scattered badge symbols.

The game’s logo acts as the scatter symbol, and when you spin three or more of these in any position on the reels, you’ll be provided with 15 freespins. During freespins, all enhanced wild wins are doubled. The freespins can also be re-triggered during the round.

Double Play Superbet takes the classic symbols of a traditional slot game and provides a modern twist on gameplay. It also includes special features to enhance your enjoyment.