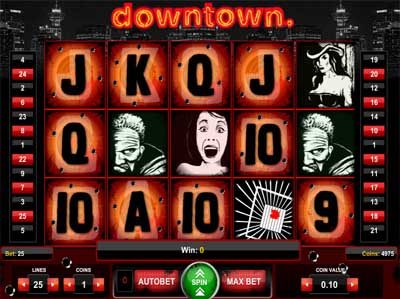 Downtown is an eerie horror themed slot game by developer 1X2 Gaming. So, if you scare easily – you’ve been warned. All throughout gameplay you will be hearing the creepy soundtrack, aided by the sound of police car sirens. The symbols here are of two types, the first of which are the lower value playing card symbols on shooting targets. You can also clearly make out bullet holes on them and they include A, K, Q, J, 10 and 9. The rest include 4 character symbols that will give you the chills. One looks like a murderous creep, whereas another is wearing dark glasses and is holding up a gun. The other two are female: one seductive and evil-looking, the other – screaming in fear. 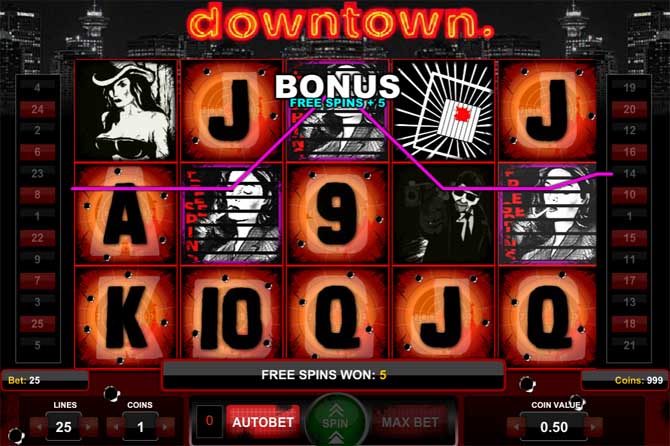 The layout in this 1X2 Gaming slot features 5 reels and 3 rows, which is perhaps the most common type. There are 25 paylines here in total, but those can be subject to adjustment. You will also have much freedom to regulate your coin value and also the number of coins you would like to wager. Thus, players will enjoy a betting range starting at 5p per spin and reaching up to £750 per spin. Notice that the RTP here is very high at 97.7%.

The most valuable symbol on these reels is that of the voluptuous female character. However, there are other no less valuable symbols, such as for example the Wild. It can replace any of the other symbols, appearing in any position on the reels, to help create the highest possible winning combinations. But, as it goes, it cannot replace any of the other special symbols, of which there are two. 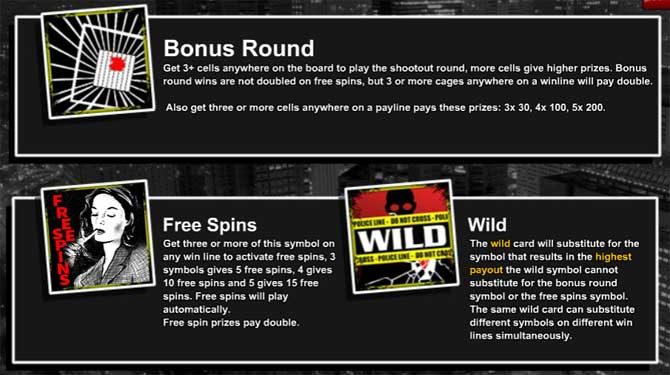 Last but not least, we have the Cell Bonus symbol. Again, you will need to land 3 or more of these, in order to activate the bonus feature. The number of Bonus symbols you land will also determine the cash prize you will receive. Thus, you can gain 30, 100 or 300 coins for 3, 4 or 5 symbols. Then this will trigger the Shootout Bonus feature, where you will need to shoot at buildings. Aim well, because hitting the target will reward you a further cash prize.

Downtown isn’t quite the jolly slot game with an upbeat atmosphere. However, there’s still much to like about it, even despite the heavy atmosphere. For example, the medium variance will allow you to trigger the bonus features at somewhat regular intervals. And the high RTP shouldn’t be neglected either.