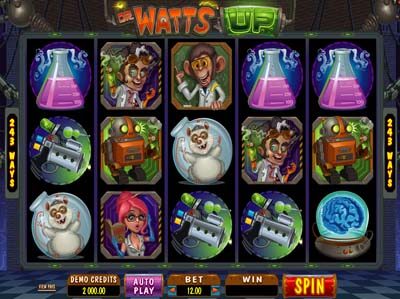 Dr Watts Up takes you on a journey through science, giving you chemical reactions, robot movements, lasers and much, much more. Powered by Microgaming, this one will ensure that you’re taken right into the heart of the story – that being that you’re a crazy scientist doing odd experiments. As such, the reels have had various icons included on them, starting with a conical bottle filled with purple liquid, a brain ready for experimentation, a microscope and a laser gun. There’s also the addition of a robot, a monkey wearing goggles, a sexy lab lady and, finally, Dr Watts himself.

The game has been created with five reels and three rows incorporated into it, so it’s another standard slot offering. Microgaming has also had a total of 243 ways to win added to the game, and this is not something that you’re able to adjust. However, you are able to alter the amount of your bet per spin, and this can be done by using the arrow buttons on either side of the ‘Bet’ box. This provides a range of between £0.30 and £600 per spin.

A game such as this would be lost without some scientific specialities included in it, so it’s fortunate that Microgaming have added some wonderful options in this area. There’s the wild icon available in the first instance, and this is represented by the game’s own logo. As a wild symbol, this substitutes for all other symbols, with the scatter and bonus symbols being the exception.

And speaking of the scatter symbol, this is represented by the atom image. These pay out in any location they show up in, with five of them providing a maximum pay out of 300 coins. Furthermore, three, four or five of these will trigger 10, 15 or 20 freespins respectively. One each of these freespins played, a random reel will be turned into a wild.

Finally, the lab rat icon appearing in any position on reels one, three and five will also trigger the ‘Laboratory Bonus’ round. There, you will need to pick two chemical tubes to reveal a prize. You have two chances to change your mind – click yes to keep the result and end the round, or click no to make a new selection of chemical tubes.

Dr Watts Up is a very exceptional game from this developer, and it certainly stands at the top of our list as one of their best offerings. The specialities included within are its most appealing additions, but the graphics and regular gameplay are just as intriguing.