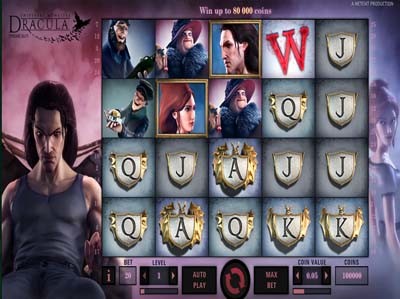 Prepare to be scared…to death! Backed by an ultimately adrenaline-racing piece of music, the collaboration between Netent and Universal Studios to create this product is exceptionally detailed, visually pleasing and features some wonderful game play. Players will be introduced to the game with a nicely crafted video package, only to then be taken to a set of reels that are watched from the sidelines by Dracula himself! Every time a win is achieved, he bares his fangs and lets out a snarl that sends chills down your spine!

The reels of the game are five strong, while four rows have been added to accompany them. A total of 40 pay lines are also included in the game, none of which can be customised. However, you’ll be able to increase and decrease the bet level between one and 10, while the coin value can be switched from its minimum of £0.01 up to the maximum of £1.00 per line. This will allow for a maximum wager of £200 to be played per spin.

This game is host to some wonderful extras, starting first and foremost with its ‘Bat Feature’. This is triggered at random during a spin, and sees Dracula transform into a mass of bats, which flood the screen and turn several icons into the same symbol.

There’s also a standard wild symbol, which will substitute for other icons on the reels in order to craft a win. These will only appear on reels two, three and four.

Meanwhile, stacked symbols on reels two and four of Dracula and his female companion respectively, will provide you with 10 freespins should they both appear fully on the reels at the same time. A further two freespins can be gained from the stacked wild icon appearing on reel three in full during this round.

If you like being thrilled and chilled, this product is definitely a sure fire way to experience that. If it isn’t the startling sounds that Dracula makes when you spin a win, then it’s the chilling appearance of the bats flying across the screen that will do it!