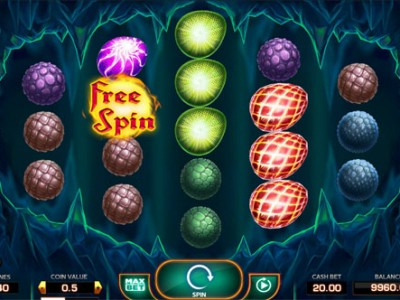 Draglings takes place inside a dark, dank cave, and the reels are filled with dragon eggs that are ready to hatch at any given time. And, hence, the name Draglings relates to baby dragons. There’s a variety of different shaped and coloured eggs in the game, and baby dragons will make appearances there as well.

The game features a total of five reels and differing rows between each one, so you’ll find a row layout of 3 x 4 x 5 x 4 x 3. Draglings also incorporates 40 different paylines and a coin value that can be switched between £0.01 and £1.00 per line. Therefore, all players have the opportunity to place a maximum overall wager of £40. As you spin the reels, you’ll see the first two come to a halt first, the last two second, and then finally the middle reel will stop at the end.

The game features three variations of wild symbol, all of which come in the shape of Draglings. There’s the blue dragon, which acts as a standard wild icon, substituting for all others to create a winning combination, except freespin symbols. Then there’s the expanding wild, which is a purple Dragling. Should this appear, it will grow into a larger dragon, or rather, expand to fill the whole reel. Finally, the red Dragling is a spreading wild, which shoots fire from its mouth to turn between one and four other symbols into wild, expanding wilds or spreading wilds.