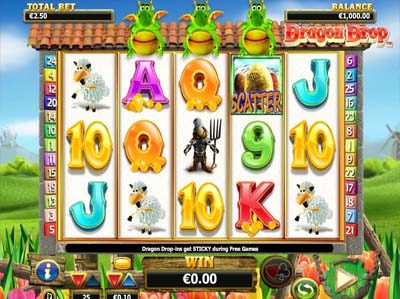 This game, presented by NextGen Gaming, is full of complete fun, featuring a very animated cartoon of a magical fairytale land with dragons, knights, castles and all the rest thrown in for good measure. It’s like something you’d find on a children’s cartoon channel, which makes it all that bit more enjoyable – helping you tap in to your inner childhood. The reels feature various different symbols, alongside which you’ll find the aforementioned castles and knights, as well as treasure chests full of gold, dragon eggs waiting to hatch, and, oddly enough, sheep.

There’s a total of five reels and three rows included in the game, while NextGen have also added a total of 25 different pay lines as well. These can be customised to allow you to wager on as many lines as you’d like, while the bet you’re able to place per round can also be altered. This begins from its minimum amount of £0.01 and can be increased up to a maximum level of £2 per active line. This allows all players the possibility of placing a maximum overall wager of £50 per spin.

As with most online video slots, you’ll find a wild icon has been included in Dragon Drop. This is represented by the dragon icon, and this appears only on reels two, three and four. If it does so, it has the chance of standing in for any other icon on the reels in ordered to form a win, with the exception of scatters.

And with regards to the scatters, these are represented by the aforementioned dragon eggs. These pay out wherever they appear on the reels, and should three or more of them show up, you’ll trigger the eight freespins round. All prizes are doubled in this round, and what’s more, there’s also the ‘Sticky Dragon Feature’ included as well. This means that should any dragons appearing during the round, they’re held in place for the duration of it.

Finally, you’ll notice three dragons at the top of the reels, and during any game these may drop in and turn any symbol into a dragon wild.