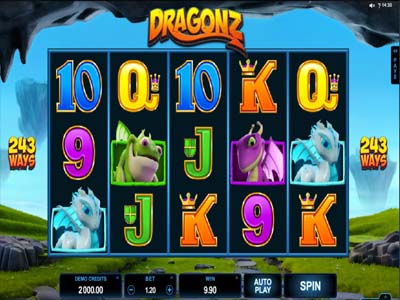 Dragonz, brought to us by game provider giant Microgaming, is a fun, dynamic 3D slot. Its awesome graphics, coupled with the simplistic design make for a very modern-looking game. It features four different animated dragons that have very much to do with the game itself. Each of them has a bonus feature to offer.

The game has 5 reels and 243 ways to win. You can play with 40p up to £30 per spin and the game is available for both desktop and portable devices. The RTP is around 96.3%, which is fairly attractive, but the abundance of bonus features this game offers is already enough to keep you spinning them reels.

Meet the dragons! Fours cartoony 3D dragon friends are the main characters in the game, who will be providing you with special features. Their names are Flint, Switch, Frost and Gobble.

Let’s begin with the Wild Deal feature. If you didn’t spin a winning combo, pay attention to the third reel to see if it has a Wild symbol on it. If it does – it will activate the feature and give you additional Wilds on the remaining reels, securing a win. This feature appears fairly often in the game, so you’ll be able to take advantage of it for some nice winnings.

Next up is the Freespins bonus feature. To activate it, you will need to land three Scatter symbols anywhere on the reels. Once this happens, you will randomly receive one of the four freespin features – each with its own Dragon.

First comes the Red Dragon, Flint. He will offer you a total of 10 freespins, and will shoot Flaming Wilds onto the reels. Throughout the duration of the feature, you can get up to 10 Wilds at a time! Next, Flint, the Purple Dragon, will also provide you with 10 freespins and Stashed Wilds. You can collect 3 or more of these non-winning Wilds, which will then be scattered on the reels.

The third little Dragon, the Blue one, whose name is Frost, will award you 10 freespins and Frosty Wilds. The non-winning Wilds freeze in place, until they form a winning combination. And last but not least is Gobble, the Green Dragon. Again, just like his buddie, he will award you 10 freespins. Alongside those are the Winning Wilds, which Gobble spits onto the reels. They remain there until they are no longer part of winning combos.

And to top it off, after you’ve triggered the freespins feature 12 times, you will then have the option of choosing the exact feature you would like to play.

As you can see, Microgaming’s Dragonz is full of different bonus games that make for some attractive wins. In addition, the cool graphics and entertaining layout contribute further to the excitement. It’s a good, middle variance slot, which offer the opportunity of winning 3,583 times your stake no a spin.