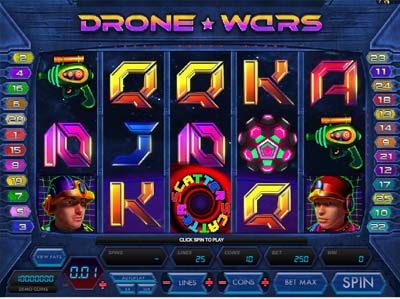 Drone Wars presents players with the possibility of looking back to the Amiga games of the 90s, offering up slightly pixelated icons, and a retro soundtrack alongside. This is everything a nineties child would ever want in a slot game. The symbols included on its reels include various different robot icons, including ray guns, two different drones, and what can only be described as various other forms of weaponry. As mentioned, the graphics haven’t been meticulously worked on in this one, but that all adds to the illusion of it being so retro and appealing.

There are a total of five reels included in the game, which are accompanied by three rows, and Genesis has also added 25 separate pay lines as well. Gamers can choose to alter the pay lines around to suit their own personal needs, as well as changing the amount of the wager they place via the coin value and amount of coins played. The former of these starts from its minimum of £0.01 and raises up to a maximum level of £0.20 per active line, while the amount of coins can be changed between one and 20. This results in a possible overall wager of £500 per spin.

One of the drone weapons included in this product – the star-shaped pink one to be precise – provides it with its wild icon. This will stand in for all other symbols on the reels, except for scatters, in order to provide you with a winning combination.

In addition to this, there’s also the inclusion of a scatter symbol, which looks like a warped wormhole. These pay out in any position, with scatter wins being multiplied by the total wager placed. If you should spin three or more of these onto the reels, you’ll trigger the ‘Drone Wars Battle Plan’ feature select screen. From here, you’ll choose either the ‘Space Attack’ or the ‘Planetary Assault’ round.

The first of these, ‘Space Attack’, rewards you with five freespins. Drone fighters will attack symbols on each freespin, and then the drones will be destroyed, turning the attacked symbol into a wild. The ‘Planetary Assault’ feature sees you trying to destroy the drone base. This requires you to select drones to destroy, with each of these awarding coins. Some of the drones will counter attack, reducing your health in the process. Once all four of your shields are gone, the round ends. If you’re able to kill 20 drones before losing, you’ll win the assault and be awarded a prize of 50 times your bet placed.

This game provides a wonderful take on retro gaming, re-introducing it to this century and providing all the trimmings with it.