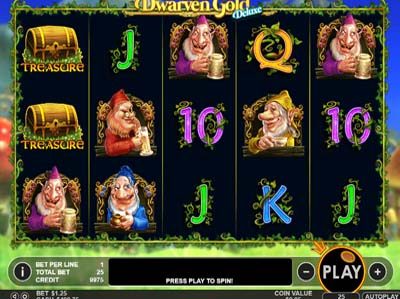 Dwarven Gold Deluxe is an amusing slot game by game manufacturer Pragmatic Play. It doesn’t exactly provide top of the line graphics, but it does feature a few humorous characters. And you need look no farther than the title itself to find out, who they are – they’re dwarves. In fact, there are four unique characters on the reels, each drinking its own beverage. There’s the tea drinker, the coffee drinker, and then two beer drinkers, as well. Accompanying them are the lower level playing card symbols: A, K, Q, J and 10. They are all styled to fit the theme of little folk and have different vines growing out of and around them. A fun soundtrack also helps create a kind of playful atmosphere.

The reels feature a layout of 5 reels and 3 rows. There are 25 paylines in total, all of which are non-adjustable. However, players do have the option of adjusting the bet per line amount, as well as set the coin value. This makes for a pretty decent betting range, starting with 25p per spin and reaching the maximum of £125 per spin. RTP clocks in at 96.18%, which is acceptable. 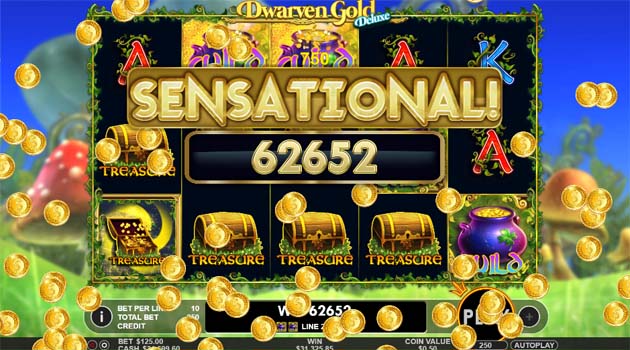 The Wild symbol in this game is a tempting pot of gold that just keeps shaking those gold coins in it. It can replace any of the other symbols, save for the Scatter, to help create winning combinations. But the real fun starts with the Scatter symbol. It comes in the shape of a beautiful butterfly, and a rare one, too. You will only be able to spot in on the middle reels 2, 3 and 4. And in order to make the most of it, you will be looking to land all three Scatter symbols at the same time.

This will trigger the Dwarven Gold Deluxe single bonus game – the freespins feature. You will receive a total of 7 freespins, but that’s not all. Players will also collect a whopping 20 times their stake! And the excitement doesn’t end here either. You might be thinking that 7 freespins doesn’t really sound like much. However, during each of the freespins, 2 Wild symbols will be added to the middle reels. What’s more, the Wild will stay in place for as long as the feature lasts, making for some nice winning opportunities. And if you haven’t done the math yet, picture this: you can end up looking at stacks of up to 14 Wilds on each of the reels 2, 3 and 4.

Dwarven Gold Deluxe offers very simple and straightforward gameplay. This can come across as boring to some, but may strike others as an advantage. Despite there only being one bonus feature with only a scant number of freespins, you can still squeeze out some satisfying wins thanks to the Stacked Wilds.